At the end of January this year, I hopped into Michelle’s car and followed my good friends Jesika and Matt Reimer to the Wallowa mountain range in Northeast Oregon. We were accompanied by Ripple, Pliny, Polar, Sloan, Fishy, Harper, Solow, Arrow, Norquay, Nakiska, Sunny, Marmot, and Revi – 13 delightfully adorable  Alaskan huskies. Michelle and I were, along with Jesika’s husband Matt, there to help Handle for Jes – the musher racing the pups. It was a great excuse to play with dogs in the snow. Fast forward a few days, we watch Jes fly out of the chute with her dogs in a green onesie. Her pack ran a total of 62 miles, and most of them were first time racers! They won!

Yes, I do realize that this is supposed to be a race report about the TRT50 and not the Eagle Cap Extreme, so I’ll get to the point. For some reason, I decided that if I could run long distances I would be able to somehow better support the sled dogs. As far as I know now, that’s simply not true. Nevertheless, my mind decided it would be a great idea to start running ultras. Did I have running experience? Nope. Not unless you count a brief stint in 2021, and the timed mile during high school PE.

After extensive research, otherwise known as typing “running coach Truckee” into Google, I reached out to Peter Fain. I think the first thing I told him was that I hate running uphill; I didn’t realize who I was talking to at that point. Either way, Peter prescribed me oodles of running regimes and put up with my incessant questions, whining, and neurotic panic (thanks Peter!). Fast forward six months, and I’ve met a wonderful group of humans, seen beautiful trails, and was preparing to run the TRT 50. I had originally asked Lesley Dellamonica to pace me for the last 20 miles, but unsurprisingly she was already pacing another friend at Hardrock (she’s too popular). After asking a few other people, Peter introduced me to Sam Smith who I can only describe as the most kind and fun ray of sunshine in this world. Naturally, I also asked Jes to crew for me and said that crewing was basically like handling sled dogs, except I would be a lot slower and look way less stoked coming in at mile 30. I was also lucky enough to rope Greg and Lies into my crew, climbing friends who are both incredible runners. The day before the race, Peter called me as I was struggling to pin my bib onto my shorts. The most surprising tidbit I have learned during my running escapade is that bibs are both way too large and way too difficult to put on. Peter has listened to me grumble about this several times. I packed my vest, drank an excessive amount of water, and tried to sleep early (does that ever work?).

At 4AM, I get a knock from Greg and Lies! They were here to drive me to the start of the race in Carson City. Wow, were they on top of everything! They ran through checklists, popped me in the car, and off we went. I really could have left my brain at home, it wasn’t needed anymore. They reminded me to stretch, take my inhaler, and generally kept me entertained and distracted from the prospect of having to run 50 miles in extremely warm weather. I’m so grateful to them!

As they sent me off to the start of the dreaded Ash Canyon climb, I was shocked by the sheer quantity of people. I putzed along slowly, trying to pace myself for the 4.4K feet of elevation gain to Snow Valley Peak. I had discovered and learned how to use poles about two weeks prior to the race, and was excited to use them. Poles made going uphill seem less daunting, my arms could help take some load off. Little did I know, these poles were likely also my downfall. I felt some mild discomfort high on my right hamstring during the climb, but nothing that bothered me enough to impact my running. The course traveled through exposed dirt road until we entered the state park; the vert eased off a bit until we got closer to Snow Valley Peak at mile 9. I was only too excited to get to the SVP AS, the next tiny chunk of running was downhill; what a great mile to just fly! That didn’t last very long, but the next miles were mostly rolling terrain with beautiful views of Marlette lake. I appreciated the scenery (which is good, because if we’re being honest I didn’t care about scenery on the way back at all) and tried to remember to drink water and eat my snacks. I discovered my obsession for watermelon at Hobart AS and thanked the amazing volunteers who were all too kind to the lot of sweaty runners coming through. I rolled through Hobart AS and Tunnel AS grazing on snacks, excited to eventually see my crew.  I thought about how I ended up on trails, wondered what my sweet grandma dog was doing at home, and read entertaining texts from friends who were supporting me from afar. Did you know that marmots can run up to 3MPH? Thanks Liz Gill!

I filled up on water at Bull Wheel, knowing that the next aid station would be Diamond Peak and I would get to see my friends; I was hoping that Jes had brought a sled dog or two for me to pet. As I got to the northernmost point of the race, I repeatedly checked Gaia GPS. I had made the wrong turn and stayed on the TRT going North instead of turning South onto Tyrolean downhill during every single training run. To be fair, my sense of direction is quite awful so I don’t think this has been a problem for other runners. I made the right turn thanks to great course marking and staring at my phone, and proceeded to head down my favorite part of the race: the next 4 miles of downhill. The first time I ran Tyrolean during training, I accidentally ran the mountain bike course, wondering to myself why in the world Peter would send me down these weird dirt mounds that bikers jumped off of. I’m so glad I figured that one out before the race. I sauntered down the mountain, feeling some more mild aching in my hamstring, but too engrossed by the prospect of seeing friends to really care. As I saw houses coming up, I knew I was close. Seeing the Diamond Peak parking lot, I did a quick scan to find my crew – Peter appeared out of thin air and proceeded to plop me in a chair in the shade. Then, a series of things happened that I don’t really remember. There was juice, coconut water, Greg handing me ice, Peter changing my socks, Sam and Jes were off doing something with my vest, and I tried to eat a rice ball but immediately spit it out. The race was about to get really hot, we were about to head up the Diamond Peak hill, and all I wanted to do was sit in that chair and hang out with my friends. I had written in my notes to the crew “make sure I leave with Sam” because I was worried I’d be so disheveled that I would forget to bring my pacer. Sam, Greg, and Peter herded me to the actual aid station where we grabbed more snacks and I dumped a bucket of water on myself. 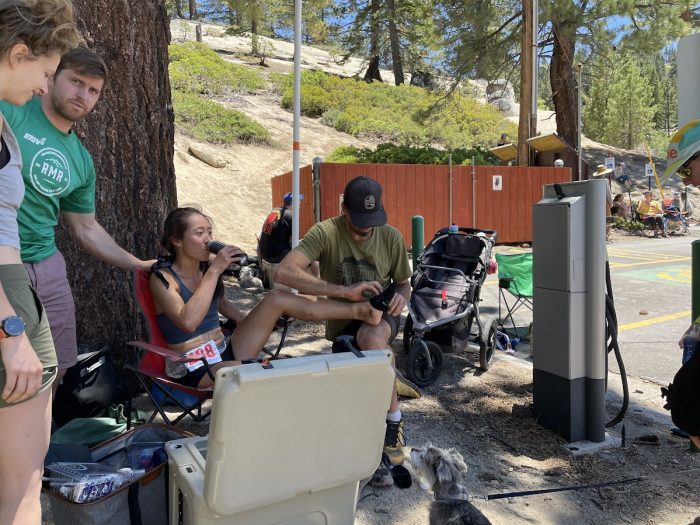 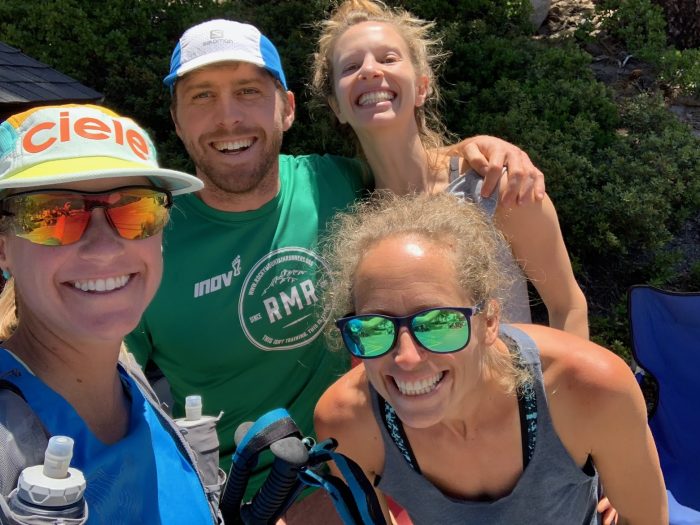 As Sam and I headed up Diamond Peak, I was so grateful to have her with me. Diamond Peak goes straight up a ski hill covering 1.8K feet of vert in 2 miles. My hamstring started to bother me more and more. I tried stretching it out, but it was in a bit of an odd place and I couldn’t quite find the right stretch. Sam, being the most amazing human, paused every few minutes to massage my hamstring and butt (yes, literally my butt) in an effort to relieve the soreness. I was thoroughly entertained by the pair of friends ahead of us; one runner was puking and the other runner was taking videos and selfies with his poor friend. I was also on the verge of puking and looking pretty gray. Sam said if I puked she would take a selfie with me too. After getting up Diamond Peak, I was both relieved to have completed the worst of the vert and concerned about the pain in my hamstring. At this point, every step hurt. I was more limp-running / walking than anything else. During this stretch, we crossed paths with Dan Brounstein, a fellow friend running the TRT100; he was looking happy and in great spirits!

The excitement of seeing Dan was followed by more limping and walking up Harlen Peak. We got to Hobart AS and I knew the last 12 miles were all downhill. This was the section I was originally looking forward to. 12 miles of happy and free downhill running with Sam. What actually happened was the pain in my hamstring got so bad I could barely walk. Any weight on my right side caused excruciating pain, and it just kept getting worse. Eventually, I was hobbling along after Sam who was still trying to feed me and keep me in better spirits. At some point my hobbling turned into a very slow limp accompanied with sad whimpers and sniffles. “You can cry and run at the same time,” Sam said with the perfect balance of kindness but also stern encouragement. She’s not wrong; you can indeed cry and run at the same time so long as you don’t get too sniffly and are still able to breathe.

It was a disaster from Hobart to Pipeline. It was hot, I was in pain, and I couldn’t run at all. Despite objection from Sam, I took an Ibuprofen; I was skeptical it would do much. When we got to Pipeline, we stayed there for a lot longer than I expected. I snacked a bunch and tried a weird ginger energy drink. No matter how much it hurt, I wanted to run the last five miles. Maybe the Ibuprofen kicked in, or I managed to turn off my brain, but we started to actually run! Even though my hamstring still hurt, Sam and I kept moving. We were able to pass all the runners that had passed us since I started limping at Hobart. The last two miles, the excruciating pain in my hamstring returned (the relief seemed short lived) but once I was moving I just didn’t want to stop. Finally, we saw Jes a few meters before the finish line, who shouted “Harper is waiting!” (one of the sled dogs). 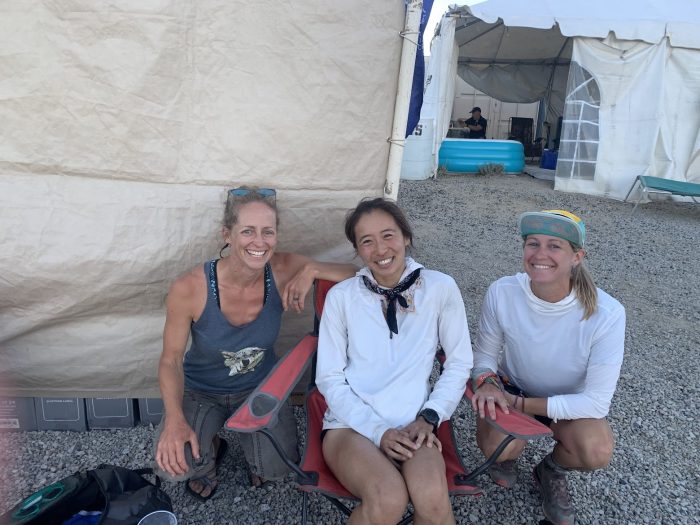 It took over a thousand miles of training and the support of incredible friends (and many, many cute dogs) to get to the finish. I wasn’t sure I’d keep running after the TRT, since the whole stint was a bit out of the norm. I planned to return to primarily climbing. I realized, though, that the people I had met along the way were far too wonderful for me to actually just stop running.