I don’t consider myself a runner. I’ve been fortunate enough to win running races, set fastest-known-times, and have even cashed a few checks that I’ve earned from running. In my view, however, these things do not a runner make.

Like every sport in a (social) media-driven world, trail and mountain running has gotten blown out of proportion. I know that it’s hip to be skinny and wear short shorts and use GoPros and selfie sticks to create images and angles that make this all seem like an extreme sport for endurance aliens, but (if you recall) we all got into running in the first place because it’s as simple as putting shoes on and running out your front door. Sure, maybe those shoes are more expensive and now you need a vest and the front door might be a Sprinter van or a rented chalet in Chamonix that you booked after your 11th UTMB lottery attempt. But let’s not lose sight of the fact that the simplicity of lacing them up and “one foot in front of the other” is part of the appeal.

Now that I’ve established how I feel that we’ve blown this out of proportion as a running community, I want to focus on not the sport or the gear but the runners. I’m proud to know a bunch of runners in countries around the world. Runners who get up every day and go for a run before work. Runners who run with a headlamp after getting off of work on their swing shift, because that’s when they can fit it in. Runners who look forward to their weekend long run all week (and maybe even a bit of travel to a running “destination” to run a particular trail, since their jobs prohibit traveling for running during the week). Runners who race often and without prompt, and will even return to the same race year in and year out for (in some cases) decades. Runners who subscribe to running magazines. Runners who watch running races as spectators, sometimes traveling to the race to simply share in the cheer of the event and the running community Runners who know their mile, 5k, 10k, and marathon PRs off of the top of their head. You get the idea.

Beyond even all of these runners I know, there are billions people that I don’t know that are runners. With a “b”. Runners of all shapes and sizes and genders and ethnicities and differing running enthusiasms. Many of them might know all of those PR times I mentioned, some might not. Some might have never even run that far. That’s okay. These are not the things that make us runners. Every day for a decade I worked in a gym and would encourage running because I loved it (yes, I love running and also don’t consider myself a runner), especially if someone got up the courage to share that they just finished their first ever 5k that weekend or ran a new mile PR on the treadmill that day. Sharing in their enthusiasm, I’d invite them on a run or suggest a DPMR group run or a Salomon meetup and every.fucking.time.the reply I’d get back would be some form of “Oh, I’m not a runner like you…”

WHAT A BUNCH OF BULLSHIT

The aggregate of your thoughts and actions dictate who you are and what you become. If you start going to the gym 3 days a week on January 1st, at some point you’re going to become a gym person. Even if you’ve never been before. I don’t know when that shift happens (weeks? months?), but it happens. And it happens regardless of whether you’re skinny or fat at that time, regardless of what your bench max is, and regardless of your race or gender. At some point, whether you consider yourself a gym person or not, enough data points exist that you are a gym person because of the aggregate of your thoughts and actions. The same thing happens with running. Again, I don’t claim to know when that shift happens, but if you love running, get up to go running, stay up late to go running, read running magazines, listen to running podcasts, etc. you’re going to be a runner. Whether you ever look like the girl in the HOKA ad or ever qualify for States or ever go “ultra”, remember that these things do not a runner make. These silly lines keep us apart and divide the running community, creating an elitist environment that discourages sharing the simple joys of running that brought us all in here in the first place.

I don’t want to diminish any runner’s accomplishments or to imply that these things don’t “matter”, because they do matter. But if you’re an experienced runner, maybe shelve your ego for a minute and wield them a little less often – you care more about your own shit more than everyone else, I’m certain. If you’re a new runner, let us experienced runners do our best to share the simple joys of this sport with you and don’t resist our offers to go for a run or invite you to a running community event – we’re not gonna just drop you and then laugh about it, I promise you.

I’m tired of gatekeepers and fourth walls and distorted images of trail/mountain/sky/fell running convincing people that it’s not for them because of that “Oh, I’m not a runner like you…” sentiment. I’m not a runner like you, either, but I still think it’s cool that we all like to run and should probably all take ourselves a little less seriously. 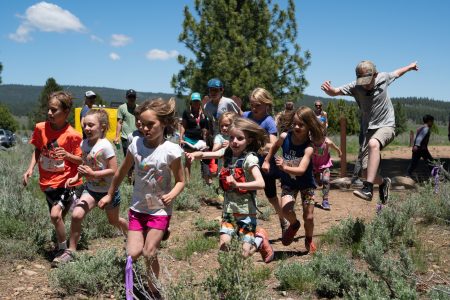