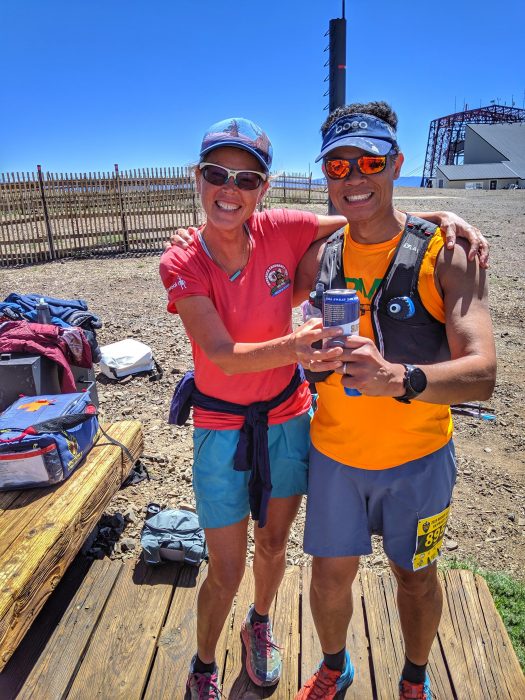 Margaret Skillicorn: Tailwind Colorado Cola. I just like caffeine and the taste of Cola! It’s like having a special treat while running long distance. I tend to only drink water, coffee and periodically a Diet coke or 7-up!

Diane Frederic: As a person that struggles with stomach issues I’m constantly on the hunt for hydration that is gut friendly. Lately I’ve realized the importance of a well-balanced electrolyte mix and I’m back to using one of the more palatable (to me)- Skratch Sport Hydration Drink Mix. I love the lemon-lime flavor mixed about 1/2 strength, and find it especially tasty with a couple crushed mint leaves and a handful of ice on these hot days!

Renee Elsdon Jacobs: Maurten 320, which was apparently what Eliud Kipchoge used when he broke the 2-hr marathon barrier. It’s amazingly mild and palatable, despite being high-calorie, making it easy to consume a lot of calories through drinking without taste fatigue. It seems pricey @ $2/serving, but on a price/calorie basis, it’s actually cheaper than most other drink powders you might consider. And because I really like variety, but also want electrolytes and amino acids, I also make cocktails out of  EFS Electrolyte Drink Mix (Orange Splash flavor) or powdered coconut water plus Base salt and/or Keon Amino Acids. I like EFS and coconut water because they both taste great in a variety of mix ratios (unlike many others I’ve tried!).

Meggie Inouye: I’ve been working on shifting my sports nutrition to whole foods and am absolutely in love with Shalane Flanagan and Elyse Kopecky’s Run Fast Eat Slow Cookbooks. Their recipe for Warrior Drink for post-workout hydration is awesome!

Jack Macy: I’ve tried a few different hydration/fuel drinks (besides good ole’ water), and keep coming back to using Tailwind mix in my soft flasks. I use a pretty strong mix for long runs, usually the berry flavor with caffeine — it tastes good, keeps my energy levels up, and never ever bothers my stomach. As with most drinks, it is a blend of carbs and electrolytes that seem to work well for me. I’m not sure I need the caffeine from the very beginning, so I’ve started playing with having one soft flask filled with a non-caffeine version for the first half of a run and the other with a caffeine version for the second half (just have to remember which is which!). For a longer race, I’ll typically complement my own drinks with whatever electrolyte mix they offer on the course, especially if it’s a hot day and I know I’ll be drinking a lot — I plan/assume that most race aid stations tend to mix it fairly weak, so switching off drinking some of theirs and some of mine is a good way to balance it out for the duration. This year, I’ve also started trying Tailwind recovery drink mixes as well after I’m done. I find them to be a refreshing, light mix of electrolytes, carbs, and protein, and I can tell a difference in how I feel for the rest of the day when I drink it immediately after finishing. I like both the coffee and vanilla flavors that I’ve tried. And for “adventure” runs, I have a new filtered soft flask for drinking water on the trail (and then carry some snacks for fuel to go with it) that I want to try out this summer.

Steve Rowbury: My favorite fueling product is carbopro. It’s a corn-based carbohydrate powder that gives a steady burn of calories, rather than a classic ‘sugar spike’. I’ve always struggled with nutrition over the years, particularly in longer races – carbopro has really helped to solve this. It’s easy to mix, and has a neutral flavor. I will add in an electrolyte, particularly earlier in long runs, or just take it neat.