It’s 11 PM.  When I look ahead to where the trail is marked, I can’t tell if the lights I see above are headlamps from other runners or stars in the California sky.   I shine my light to the left and hear a voice: “grab the rope……welcome to the Palisades”

Since Andy and I split our time between Reno and Truckee, we are members of both the Silver State Striders and Donner Party Mountain runners.  This year was the year to finally do the Silver State 50 miler and Castle Peak 100K, the signature races for both clubs. After traveling a lot to races last year, the thought of sleeping in our own bed and running with lots of people we know sounded perfect.  Not to mention knowing the trails.

We arrived at the CP100 start feeling rested and strong.  Plan, as always, was to go out easy and have no expectations.  Having done Lost and Found and the training run a few weeks ago, we kind of sort of knew what we were in for in the second half of the race. 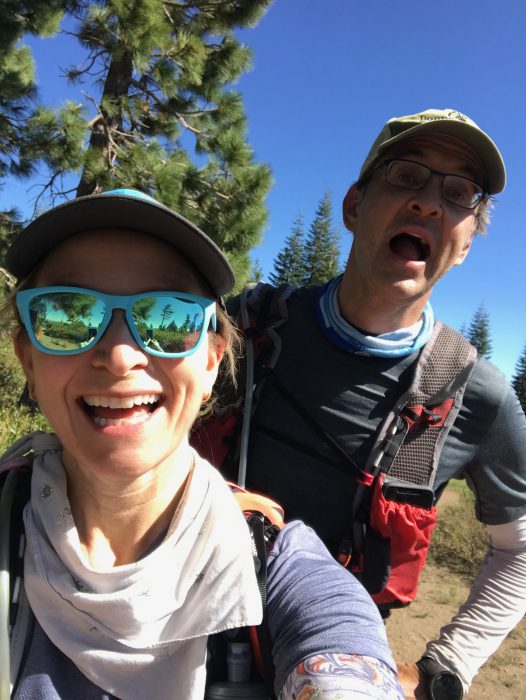 The first 10-15 miles went by quickly and enjoyably:  it was cool, the sunrise was beautiful, and we were practically in our back yard.  We were running with some friends from Reno, Teri and Chelsea, and made some new friends too.  On the back side of Animal, a trail we’ve done numerous times to get ready for the race, our friend Roger Pynappel mysteriously appeared three times.   I flashed back to seeing Roger in the spring when there still feet of snow on the trail in these same spots. A few miles later, Jon Murchinson warned us to keep running through a wasp swarm; fortunately I only got stung once.

Getting to Johnson Canyon was our first mental check point.  We got our drop bags, ate, grabbed our poles and got out of there.  We had just done the Lost and Found 55K so it was déjà vu. Except this time, we had an aid station at the bottom which allowed us to fill up our ice bandanas and put ice in our sleeves as the exposed climb up to Summit lake always seems really hot with no breeze.

When we took a right on the Warren lake trail, beautiful wildflowers and scenery greeted us along with more rugged trails and more climbs.  We kept thinking the Devil’s Oven aid station (such and inviting name!) was right around a corner. We finally made it and saw Gretchen, Jamie and the rest of the crew:  so thankful they brought all that water up, I think I may have said I will volunteer there next year? We were still moving well over Basin Peak, along the ridge and then the technical downhill down Castle Peak which seemed a bit easier than it did during Lost and Found.   Practice helps! 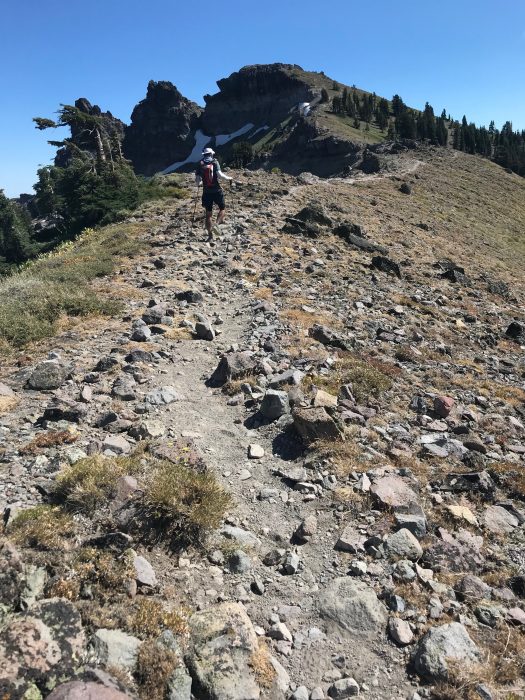 One of the best sounds in the world is the peal of cowbells and the “Wooooooooo!” of an aid station which is what we got coming into Castle Valley.  George, Kathy, Jill, Al, and the rest of the team were a site for sore eyes . We got some super delicious popsicles and I did some foot care. For the first time in the race, I was beginning to think that food did not sound good.  We were about 45 min ahead of the cutoff and for a brief time felt very confident to make Van Norden by 8pm. We caught up with a couple of friends including Steve Martelii who had been extensively stung by wasps and was having a really tough day.  While we got out of Castle Valley with time to spare, runners in our group were getting worried about the 8 PM cut off at Van Norden (which got us starting to worry) and so a lot of them picked up their pace.

Despite no major climbs, during the Hole in the Ground trail segment things started getting really tough.  It was the one part of the course that we hadn’t run in a long time. The trail was rougher than we remembered with rocks and roots constantly tripping me up.  My blister was getting more painful. I got into that “ultra math” mindset, calculating how many miles and how much time and omg it’s starting to get dark.. After I had to go back for my forgotten poles at the Hole in the Ground aid station, the thought that we may run out of time began to form.   When we got to the “impromptu” aid station , we asked as we blew by how far it was…4 MILES????!!! Wasn’t going to happen it’s too far, what happened to our time cushion, we did our best, there’s no shame, we didn’t quit, this course is long, and I’m never going to speak to Peter Fain again etc was going around in a loop in my mind.  As we approached the highway overpass and the sun was setting, I was already picturing my shower, a glass of wine and getting to bed at a reasonable hour…..

Until Andy Starkoska was walking toward us started yelling:  THE CUTOFF HAS BEEN EXTENDED!!!! YOU ARE GOING TO MAKE IT!!!!

WORST. NEWS. EVER.   I had mentally checked out. There was no way I would be able to go out there.  I was going home. I was done. I was going to barf. The end.. Basta. Finito.

After a train cleared the tracks , I came into the Van Norden parking lot. Jenelle, Shannon, Lesley, Sherri and other people met us with cheers and encouragement.  I could only sit with my head in my hands and cry. I had never felt like this before, I had never struggled like this, I had never ever quit…. and then I hurled. As I sat in the grass crying and blowing my nose, Jenelle said, “So do you feel better”?  And weirdly, yes, yes I did. Shannon had already opened up my drop bag and got my fresh shirt and buff. I quickly changed. Andy had changed his socks and was eating something (Note from Andy: I sort of figured she really wasn’t going to quit so I wanted to be ready but I also knew I needed some outside help getting her turned around since I wasn’t in the best mind frame either!) ….and then we were out.  I don’t know how they did it but the crew at that aid station saved my race no question.

Into the cool night we went; As someone in the aid station said, you only have to run  12.5 miles and you have 5.5 hours to do it…..but they forgot to mention lots more uphill.  Grind time. Passing some people? Feeling pretty good but can’t eat. We kept moving, spirits better and feeling determined.  I was so glad we did a training recon with Lesley, Carol, Abby, and Shannon: the climbs were sort of familiar (but where did those houses come from?)  and we were in a groove. We were super careful to not miss any turns as getting lost now would have really been bad. The only thought was to continue power hiking and even running a little where we could, no stopping for anything.

After Crow’s nest, we hit the infamous Palisades.   Safety guides literally would appear out of nowhere and gave us so much energy.  Kynan, John, Kaycee, Jill…..all of them recognized us and encouraged us…hand over hand on the ropes and the rocks and finally we got to the top of Mount Lincoln.!!!  That last star wasn’t the middle of Orion’s belt – it was Robert Johnson’s headlamp. Less than 4 miles to go we met up with Chelsea and her energetic pacer! It was now possible to believe we were going to make it.   WTF??!- can’t we go around Mt. Judah on the normal trail instead of over the top? We ran, we hiked, we ran some more, we all kept saying: WE ARE GOING TO MAKE IT! And we could hear the finish line even when we couldn’t see it….and when we did see it?  What an amazing feeling!!! The best and biggest hugs from Helen and our reward: the coveted belt!!!

Castle Peak 100K is the hardest race I’ve ever done and I wouldn’t have been able to do it without my partner in life and on the trails.  The support and love and encouragement from every single person working the aid stations and the people who marked the course and did every thing to make this race happen carried us to the end.  We work aid stations too and it’s humbling to know the role you play in the lives of runners as they pursue these difficult personal challenges. Ultimately it’s just gratefulness: to be alive, to be moving, to be able to run (or even walk), to be free enough to do this for fun, to have friends.  To love and be loved.

See you again Castle Peak 100……..as a volunteer 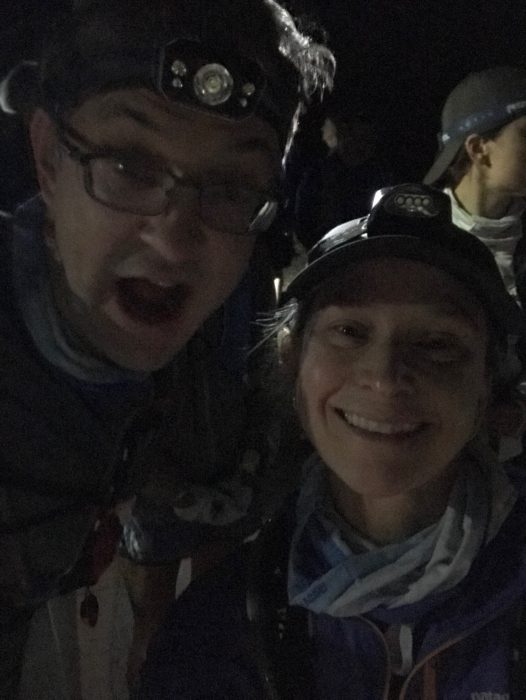