As I slogged along the muddy MUC this year, it was raining – hard, to hardly, then back to hard again – from beginning to end.  I wasn’t sure I was ready for MUC this year – hadn’t run much, I’d gone skiing in CO in early February then down with a bad cold for 2 weeks (yes, I had my flu shot), I’d done some short hill work in the Sonoma vineyards but nothing like last year when I felt driven to get ready for my Alps “runcation”.

This year, I didn’t have a goal like that to work toward and felt ambivalent about MUC and just about everything else. I wasn’t even sure why I signed up but like everything else in life, showing up is at least 50% of the battle.At the MUC start area this year, folks hunkered down under a bus stop shelter, under the eaves of the bathroom building – anywhere out of the rain, which seemed sort’a crazy since we all knew we’d be out there for 2 – 4 – 5 hours to get the job done and – let’s face it – get wet.

I wandered the start/finish line area where all the prizes, food, and T-shirts were on display. The Ts this year were a wonderful blue….I wanted that blue T.  Last year’s T was (IMHO) a gawd awful green that didn’t go with a thing and was soon relegated to the car wash rag bag. But this year, I really liked that blue T; I wanted that blue T. I asked and confirmed that one doesn’t get a T unless you finish.  OK – I now had a goal = that blue T. Not exactly pumped but I had a goal other than “blow this off and go get a hot cup of coffee at Peets in Mill Valley”. 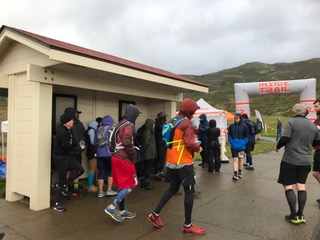 We had the start count down; as the tempo of the rain picked up, so did all the runners and at 8am, we were off  and shortly I was bringing up the rear on the way up to Wolf Ridge and then down the Miwok to pick up Coastal and start back up again. Last year, this part took me about an hour; this year: an hour 15 minutes. But I had a good reason: unmotivated, not much training under my belt and it was raining. A little slower but hey, at least I was out here.  My gloves were now soaked and useless for purposes of providing warmth so I hung them around my hydration pack to go ahead and just drip and snuggled my hands up my wind/rain breaker jacket sleeves.  Somehow, the “up” portion of the Coastal to get above the Waldo/now Robin Williams tunnel seemed a lot longer….or I was a lot slower. I asked the guys at the first aid station – so what time did the first person in the 25K come through – he thought around 8:40 – it was now almost 10 – over an hour later….no matter. I was out here. Everywhere/anywhere on the MUC today seemed like a point of no return and besides, I now had a goal: wanted that blue T. Onward!! 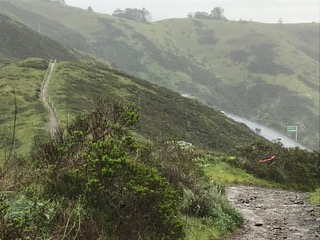 I had watched A Star Is Born on Netflix the night before and Gaga singing La Vie En Rose was blowing through my mind. It was muddy; I was muddy; I was trying to be cautious; I was slow…..which brought up my little judgmental mind – what’s wrong with me – legs like lead, I used to be able to run an 8 minute mile – come on, Carol – but wait – you were 40, so what?!  Wise Betsy’s words were also rattling around in my head – “you don’’t hunker down; you keep going, pushing, go!” To remain calm and move forward, I got into the zen of it and counted – didn’t matter what – just count. I’ll be 2 hours older whether I finish or not so I might as well finish….besides – that blue T was calling my name.

At last, I was cruising down the Marincello to the last aid station. Even this part seemed slow. My feet were soaked and squishing around in my shoes.  I thought of macerated feet like I‘d read about in Fixing Your Feet (Vonhof) and seen in some of Spike’s photos of some feet in real trouble.  My right heel felt a little “bruisy”, my lower back was starting to feel achy – that’s what I get for not  properly training….oh, yeah….I’m not 40 anymore. Not the best idea to just get up and go but – just deal with it.

Boy, was I glad to see the finish line and get even more hugs from the rest of the DPMR crew. The support, hugs, smiles and encouragement warmed me to the bone. Last year, I got first in my age group (there were 3 of us) and finished in 4-1/2 hours; this year, I got first in my age group and finished in 5-1/2 hours – yes, I was definitely slower…..and the ONLY one in my age group. All the other “seniors” were likely at the Peets in Mill Valley. In the end, I felt wet but ALIVE, got lots of hugs from my DPMR inspirations and……..that damn blue T!!  Love you guys – thanks so much for cheering me in! 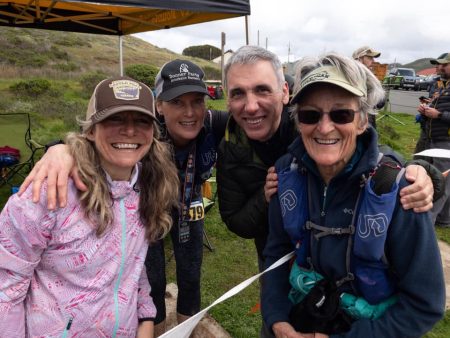