Tahoe 200 (Tahoe 206.7 is just not as catchy) is back in our ‘hood again. This year, the race is going in the opposite, clockwise direction — which gives something to do for those who have run counterclockwise previously, gets in the loneliest farthest afield crewless miles – last (right as you’re 2- to 4-days delirious — depending on your speed), and hits the Brockway BnB aid station at just 50 (or, 52.5, as it were) miles into the course.

The Brockway aid station, presented to you by the Donner Party Mountain Runners (but let’s be real, presented to you by the family and friends of Mike Tebbutt), was up to the task from early Friday afternoon to the wee hours of Saturday morning. Due to the super fast pace this year (the winners obliterated the mens and womens records both in sub-50 hours — that’s half of the cutoff time!), there was no time for the delicacies of the a la carte menu, and thus, the model T assembly line food production (T for Tebbutt) was engaged.

[Mike’s van chock full of aid station gear; JP disassembling the tents and Naomi putting away the memory of what she saw in the sleep station. Photos by: Liz, Ksenya]

But seriously, the Tebbutt family crushed this race. Joel Tebbutt, dressed as Bacon, flipped 250 burgers, cheeseburgers, veggie burgers and made 250 quesadillas. Liz Tebbutt was on napper wake-up duty and collected fun quotes to remember after the sun rose (one runner, when asked how he wants his burger, requested “medium rare”. No, man, do you want mustard on it? The burger “how” has only two options: it’s either cooked or not cooked). Tebbutts-in-law (Andrea and John Ross, Liz’s parents) for the second year in a row accommodated all the food allergies, sensitivities, and preferences as they slung homemade chicken noodle soup, vegetarian chicken noodle soup, and gluten-free chicken noodle soup. John was also resident DJ and pyrotechnics guru. And Mike Tebbutt, a past year race participant, broke so many eggs for the breakfast burritos that there was still a small bathtub of yolks glistening in the glimmers of dayrise. Thank goodness for Burning Man happening the same month as T200, as the fam haven’t yet stowed away their playa arsenal, and so they rigged up all the easy-ups and warm lights and cozy rugs for all to enjoy.

They say that the Tahoe 200 is like a mullet — business in the front, party in the back. This year, at just a quarter of the way in, the staff here at Brockway BnB was operating in a time-compressed short haircut mullet, more of a side-swept bangs — there was quite a bit of business** and possibly not enough party. No runners were yet too wasted to say too many funny things (except for the woman in the dawn hours who with just an hour to spare to the cutoff left a dude sleeping on the side of the trail because she didn’t know how long he’s been napping and wanted him to get a good rest. Luckily he woke up and arrived pre-deadline as well), so we had to self-entertain.

[Leopard/cheetah Kathy D’Onofrio; Rossoup in action; Claire, not sure what she let me get her into. Photos by: John, Kathy]

Past year race participant JP Prince, predictably (as in all four previous years), was on clipboard duty at the front desk. JP warmly welcomed runners in and recorded their departures (“Bye, 123!”), and during long runner lulls, schooled new club member Claire Butler in a 2nd grade lesson on how to write legible digits (don’t hate the playa’, she was born after handwriting was a thing!). Diana Schlaff (a past year two-time race participant and an actual 2nd grade teacher) put in long hours solidifying the runner welcoming system before and after her midnight nap. Ginny LaForme, who holds the record for the longest consecutive and non-consecutive hours at any aid station (this year she hit up Stephen Jones, Brockway, and Spooner as a volunteer, and numerous other stations as crew for husband Eric Robinson), engaged in making the system work with perfect penmanship. When he wasn’t busy sous-chefing to chef Bacon in a bacon-matching shirt, Dylan Andrews did his darndest to lull the front desk crew to sleep with such invigorating music as Albinoni’s Adagio and Yo Yo Ma’s slower acoustic cello numbers. Several fans of the aid station visited for fun times and stories in the dark – Geoff Quine, Sean Flanagan, and Mats Jansson (who tried to entice folks to run a neighboring Nav-X course in the middle of or after their 200 miler, NBD).

Meanwhile, In the seating area, a scene from a bona fide refugee camp was unraveling. We have never seen this many runners here at once, and they didn’t even have any pacers with them because pacers were only allowed from next aid onward. Runners were sitting in all the chairs, on all the cots, on all the tarps, on all the rugs, in all the dirt. Previous year race 3rd place finisher Kathy D’Onofrio provided personalized tea service in a fashionable cat mashup getup (white leopard / cheetah). Last year’s race 10th place finisher (and first in her age group) Naomi Plasterer trained during last year’s event for the long haul of this aid station, and thus stayed for a double shift, including clean-up and wrap-up with Diana, JP, Liz, Mike, the Ross’s, and current race participant Drew Smith. Absolutely nothing in the training, however, prepped Naomi for the sight of a “fully naked man — no blanket — in the sleep tent, and he farted on the man sleeping beside him” (direct quote). Laura and Kathy Millon brought popcorn, to reminisce on the good times we’ve had with her daughter — our friend, long time Brockway BnB volunteer, and last year’s race participant — Julia Millon <3. Kathleen Foster-Wendel from Iowa was not only our medic (along with Angel Mathis) for the 200+ blistered and chafed runners all night, but she also later swept the Brockway to Tunnel Creek section. As a pediatrician, she’s used to long shifts and crybabies (and now so are we, having to kick out the last of the cursing stragglers into the wild at cutoff time after walking around the sleep tents blasting Wham’s “Wake Me Up Before You Go Go”). Many thanks to other volunteers throughout the day and night – Kim Kortz, Amanda, Sharon – and also Karen and Adam Kimble who sprinkled a little trail magic on Mike by showing up just at the right moment to break down the remains of camp. A shout-out to all the above and all those whose names I forgot to include.

Watching a 200 mile race progress is like watching my 401k increase in value — it’s a long game. Just like last year, it wouldn’t have been as fun if not for the SPOT trackers, so that we could track Donner Party Mountain Runners (and local party runners) on the go. In Tahoe City, Drew Smith (who got in precisely 0 running miles in the last 6 months and was training exclusively via mountain biking, fishing, and drinking beer) cordially freed himself from the agony of scraping whatever un-callused skin there was left, and me from the agony of sleeplessly driving around the lake for 4 days. Eric Robinson (who earned his entry into the race by numerous nights of volunteering at Brockway BnB in previous years) stuck it to the man by walking the whole 200 mile course without running a single step in 80 hrs — he was very efficient at aid stations. Katie Wyatt has risen from the ashes of her October ankle surgery to maintain an impressive front of the pack domestique advantage for a large portion of the race and finish 5th woman midday Monday, assisted by various pacers, including Sharon Fong for 38 miles. And Kelly Barber (another Brockway alum who earned his entry by volunteering), paced by Kaycee Green and Sean Flanagan, swooped in on an 8th overall and 7th man place early Monday morning under 70 hrs (his SPOT tracker, curiously, finished later that afternoon). Congrats to all the runners!

Interested in partaking in the race but not yet ready to run? Join the volunteers at Brockway BnB in 2019! 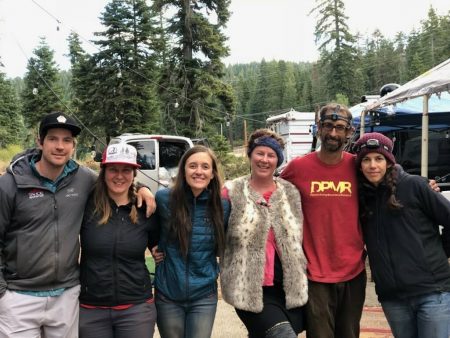 *This is Brockway, Unfiltered. A little sleep deprived. I wanted to capture the beauty and generosity and fun of this aid station by a real photographer, but Scott Rokis said that I, too, can do nighttime photography by now, so I backpainted this scene with my headlamp light for y’all, and took many grainy pics. Someday we will add a link to Scott’s more beautiful photos from his stopover on Friday night.

[city at night, city at niiiiiiight. Photo by: Ksenya]

**And now for a sample of true dedication, look closely at the photo of this man — his bladder broke on his flight over to the race, so he has a strange number of water carrying things and contraptions that he had constructed the night before the race. Don’t try this at home. 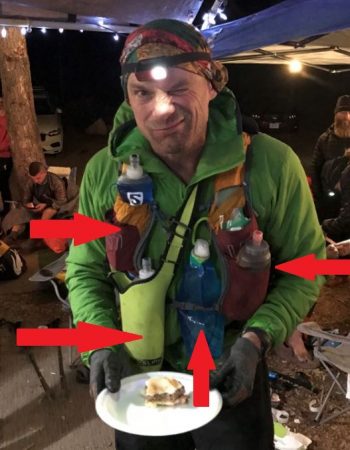 [Randy (runner #145) and his patented hydration system. Photo by: Naomi]