A wise man once told me, the metric to determine that you are well trained is to be able to drop into a half marathon on any given day. So this past weekend I decided to put this theory (and my ego) to the test.  Days before the Escape From Prison Hill Half Marathon I decided to go for it. Or at least the 10k option was what I told myself when I woke up at O’Dark thirty in the morning on race day.

I arrived at the race earlier than I needed to, as always. But I was super excited to see several other DPMR members.  I got signed in and also got some tips for the course and hydration needs. Lesley Dellamonica suggested that I wouldn’t need my vest and that a handheld would be sufficient. Which was the first of several other sage bits of advice she helped me out with during the race.

The event was very well-managed and had an abundant amount of super energetic volunteers. This was the case for the parking attendants, those handling registration, and the aid station folks cheering us on along the way.  The day led off with race instructions (which I should have listened to) and then we were promptly off on our way at the official start time.

The course was a lot of fun and was definitely different than anything I had run so far. The first climb was about 900 feet in the first two and a half miles or so. Slow and steady was the game plan. I figured if a few of the DPMR Board members said this was “a good course” that I would be in jeopardy of blowing up if I wasn’t careful. Near the top of the first climb I got caught by Lesley and Diane Frederic. Lesley ran with me for about the next 6 miles or so, which was good because she told me about what was coming up and helped with my expectations for future exertion.

Towards the end of the race there is another long steep climb of nearly the same elevation gain as the first. But, because of the warming temperatures and the legs getting tired this one felt a little tougher than the first. I decided the hike the first portion and run the last when I would be closer to the top. This approach seemed to work well. Once at the top aide station I began to have far too much fun chasing runners in front of me (so much so that I chased them right past a turn in the course). So, the three of us got to add some more vert to our day to climb back to the trail we missed.  From there there was another short climb and then a super fun descent down a steep sand dune like trail.  We hit the flats and emptied what was left in the tank towards the finish line where other DPMR members were there to cheer us in.  The after race festivities included the opportunity for massage work (which I should have visited) and some super tasty burritos.  I ended the day as I had started, chatting with my DPMR family.  But this time I did so with my first official trail half marathon under my belt! 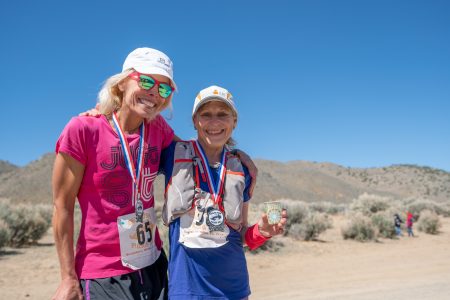 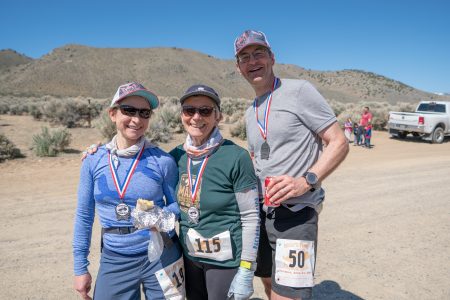 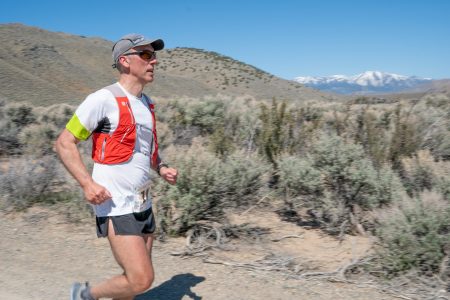 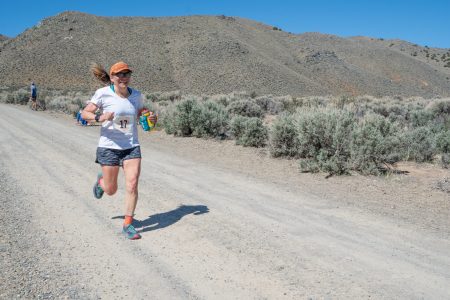 A few more photos (above) of the DPMR gang by Helen Pelster.