To get ready for my alps “runcation”, I signed up to run a race every month through the summer, thinking it will help me stay on track with my training…. you, know, little mini-goals to advance me toward the real goal of not embarrassing myself in front of a bunch of 30 year old gazelles/ibex in Chamonix come September. Feeling all puffed up after completing the MUC 25K in March and coming in “first” in my age group in around 4-1/2 hours, I thought : “I’m on a roll”. The Canyons 25K was next on my “to do” list..…how much harder could it be?

Never having run in this area, I thought it would be a good idea to check out the trail. So, Sierra, my dog, and I fooled around on the course at the end of March at the Canyons practice run. Besides, I wanted to see what a little of the Western States 100 course looked like. We started off toward Michigan bluff with the group, then arrived at what looked like class 4 rapids – to me, anyway. There was a guide rope to help everyone get across, and a nice fellow offered to carry Sierra across the raging water, but I thought – how the heck do I get her back across that water on the return trip, knowing full well I’d be bringing up the rear. At that point, I decided we would backtrack and go find the 25K course. Found it and went 3 or 4 miles down the hill and slogged back up for a total of about 9 -10 miles over a leisurely 4 hours. I can do this!

So April 28 arrived. One of my friends who thinks I’m wacko for spending lots of time running in circles around Sonoma asked me how long I thought it would take to do Canyons 25K; I cavalierly said “oh, 4 or 4-1/2 hours”, thinking I had an additional month of training under my belt – no problem. I had seen the course, first half down hill – should be a cruise. She just shook her head. I should have known better. The night before, Peter sent me a pre-race note: “Race hard tomorrow….…easy first half then choose to push the second half. Get into quality suffer mode”. What??!!

So 7am and I’m lined up with all the 30 year olds again. We’re off and going down and down and down. It’s getting more and more technical. Passing Cal 1 – what? only 3 miles into it and 5 more to go to Cal 2? But it’s all down hill. Staying light on my feet. This time around, I passed the gabby girls – I think each of them was doing a “post mortem” on every race they had ever run in their life. No matter; I took off my wind breaker and looked at the stunning views of the American River canyon and the river below, noted the glorious wild flowers and luxuriant poison oak along the trail and chatted briefly with folks I passed or who passed me.

What a high – this is what its all about – I feel alive! About 1-1/2 hours in, the lead runner was on his way back up…..whoa – I must be near Cal 2. My lower back was starting to feel a bit stressed with all the downhill. Wrong! An hour later, I finally found Cal 2. All that down hill had my lower back barking a little. Yikes – Note to self: I need to do more of those core exercises!!

Chatted a bit with the DPMR crew and turned to go back and start “quality suffering mode”. At some point, I made the mistake of looking up. Holy moly – that was one steep pitch. It didn’t look THAT steep on the way down. “That which is seen cannot be unseen; It is what it is” and all those other cliches – I was really thinking, WTF (reminder: Helen told me that stands for “where’s the finish”). Much to my surprise, once I had scaled that first steep pitch, I actually felt like I could run – ok, shuffle – up the hill. I nibbled at the energy bars I had stashed – don’t crash; even if I had wanted to drop (God forbid), there was no way out but up, and up, and up, and up. Back still kinda tight but now my right foot started hurting. Wait – that’s what those expensive orthotics were supposed to take care of!

I ran into a gal who was walking her way up – her IT band had frozen up – she was in pain. I offered tylenol – she declined. Another gal I met on the way down had hurting knees from all the down hill. I offered tylenol – she declined. On the way back up, she caught up with me. We took action shots of each other on my phone – her name was Julie. I told her I would send her photo to her but – rats! didn’t get her phone #. I’ll figure out how to get in touch with her at some point – it’s a really cute pic of her. I called out to her as she ran ahead – “every step is a gift”. She called back, “yes, indeed; it truly is”! 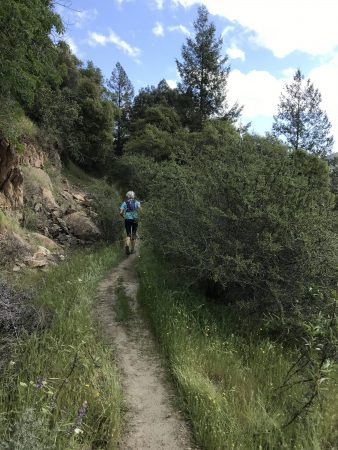 As I continued my trek/trudge up the hill, many of the 100K people were heading down to Cal 2. Amazing to see these gazelles in action. I don’t know what mile they were experiencing, but I don’t think any of them had broken a sweat. They all looked fresh as a daisy and cheerfully said to me “good job, Carol”; “nice work, Carol”. I thought “huh, how did they know my name?” Well, duh, it was on my bib!! Maybe this was part of the “quality suffer mode” ….was I losing my mind?

At last, the last turn, and heading into town and crossing the finish line in 5-1/2+ hours. With all those people standing near the finish, I made a point to run across.

I have no idea if I was first in my age group or dead last and you know, it really doesn’t matter. What mattered most to me was the encouragement and support of everyone I experienced at the Canyons. It was also a special treat to see Jenelle and Stephen at the finish. Jenelle gave me a hug and headed off to run down to Cal 2 to volunteer at the DPMR aid station and Stephen found me an ice cold Coke – such a sweetheart! I think it was the BEST Coke I ever had.

Next month – Paiute 1/2 marathon and a practice Broken Arrow. Indeed, every step is a gift! 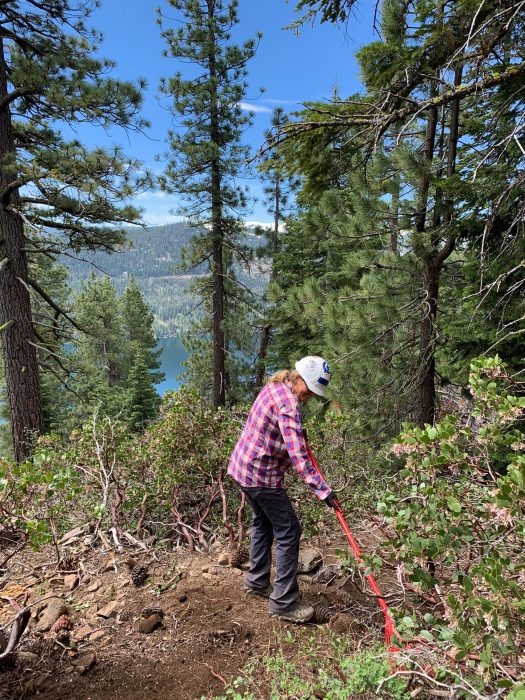 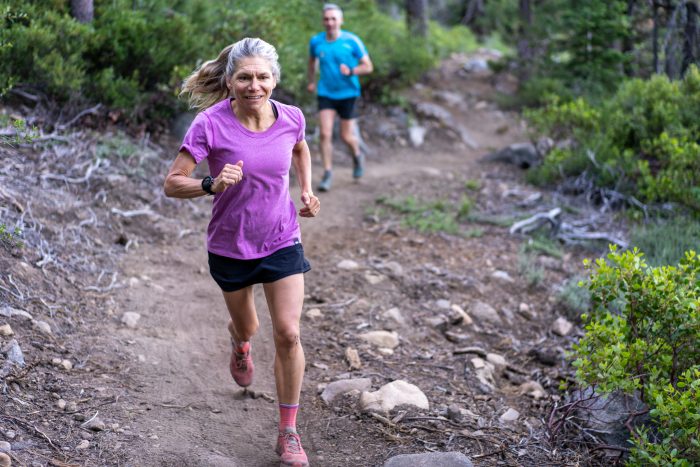