So, we decided to do the Scena Napa Valley 50K to get another long run in before the Canyons 100K….theoretically thinking that Napa would be “fun” and “easy”….after all, the word “Napa” conjures up lounging in wineries sipping chardonnay, relaxing in posh spas, indulging at incredible restaurants and ambling along wildflower lined paths.

Well, there were lots of wildflowers……

It had been raining all week before the race so we were prepared for rain on race day. Fortunately as the morning dawned, the weather was overcast and dry. The hills were still shrouded in fog and clouds, however, so we couldn’t see the turnaround point at the top of Mt. St. Helena. There were about 100 runners at the start for both the 20 mile and 50K. The race started and we took off through the streets of Calistoga to the base of the Oat Hill Mine trail.  We have done some of this trail so we kind of knew what to expect. The first 5 miles were uphill but runnable, even though the trail condition was muddy and slippery. All in all, exactly what we had in mind. 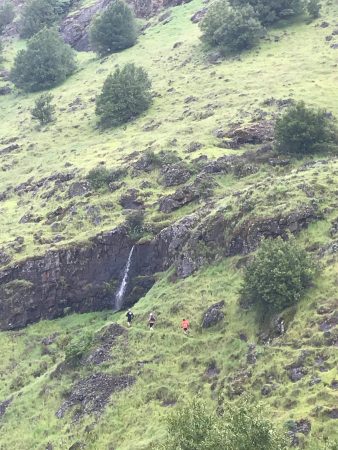 We then met up with the Palisades trail. We had never been on this trail before and some of the pre-race recon reports had us concerned as people talked about how treacherous the trail is. This is where the race had the potential of going from Wine Country to “Whine” Country.   The difficulty is surpassed by how beautiful this section of the race is. Gorgeous vistas of green hills and rolling fog, every color wildflower, and waterfalls around every corner were our rewards for struggling over giant moss covered rocks and mud pits. I don’t know how our fellow super strong runners were just scampering over the hazardous trail…I just didn’t want to end up on crutches. 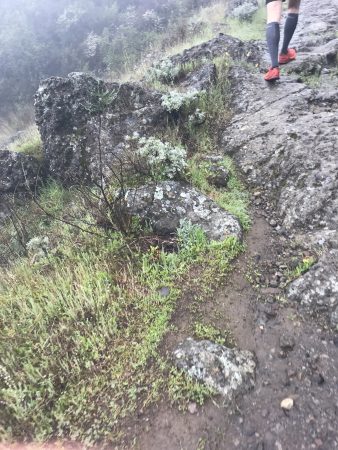 We passed by the Maze: a really cool rock land art project with a nautilus shell in the center. 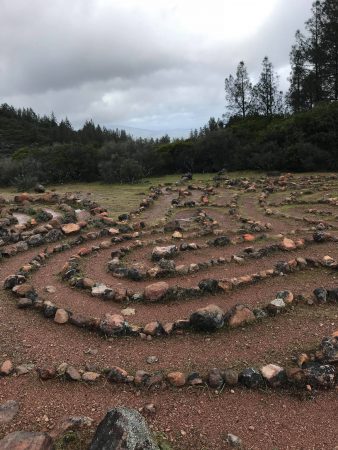 Finally, in a bit of a respite in the final half of a mile to the aid station at Hwy 29. This was the turnaround point for the 20 mile run. It was briefly tempting to think about dropping down as the 5.5 miles of the Palisades really slowed us down compared to our “normal” pace.   Since we knew the next section would be more runnable it was a pretty easy decision to keep going.  Seeing the leader of the race going back towards the finish (he was just shy of 20 miles and we were at 10.5) was pretty impressive. 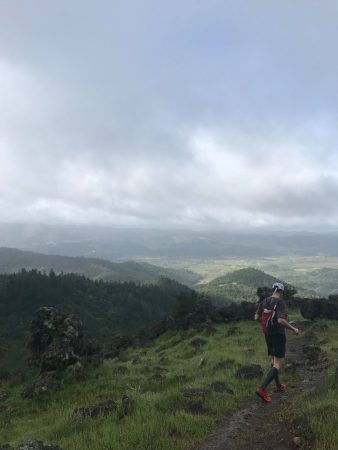 The next section was a steady uphill to the top of Mt. St. Helena. You start out going by an area where Robert Louis Stevenson and his wife were squatters in a mine bunkhouse for a few months after their wedding. No time to look at the monument today- keep pressing on through a short section of singletrack to the fire road that takes you to the top. Wildfires swept through this area last October resulting in blackened trees and bushes. New green plants were pushing up through the charred ground, always a cool thing to see after a fire. It got colder and windier as we made our way to the top and our Patagonia Houdini jackets were perfect. Once at the top, no view at all unless you count just white as a view. Running down from the top of Mt. St. Helena on the fire road back to Hwy 29 brought big smiles to our faces. Once we made it back to Hwy 29 it was time for part II: the next 5.5 miles of the scary technical Palisades section again in reverse. Somehow because we knew what to expect this time, it wasn’t as crazy. The very last section included a steep muddy downhill where you could tell other runners did a “mud glissade” either intentionally or accidentally to get down. The sun began to peek out and we carefully made our way along the trail. Once we got back to the Oat Mine trail, we were finally able to pick up the pace again on a very runnable mellow downhill. A few turns through Calistoga and we were back at the campground and the finish.

Overall, the race course is very technical and very beautiful. The aid stations were super friendly (though not exactly where expected mileage wise) and well stocked. I was surprised that there weren’t more runners!! Logistically we stayed in Calistoga so it was great to be able to walk to and from the start and jump into a thermal mineral bath for recovery.   Mud baths and massage the next day didn’t hurt either. Hats off to Scena running for putting on this great race…. 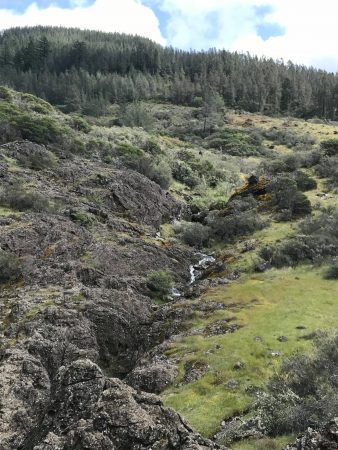 START DATE TBD!! COME BACK FOR UPDATES This is a weekly “no-host unofficial” trail run that changes locations monthly. Well-behaved dogs are welcome.  Join us every Tuesday at 9:30 am for a social run on[...]
View Calendar
Add