Somewhere along the way, between point A and point B, Audrey smiled and then giggled, abruptly and loud enough to catch all of us by surprise. We weren’t really sure what to make of it because smiling and laughter are not often two responses associated with ultra-running. 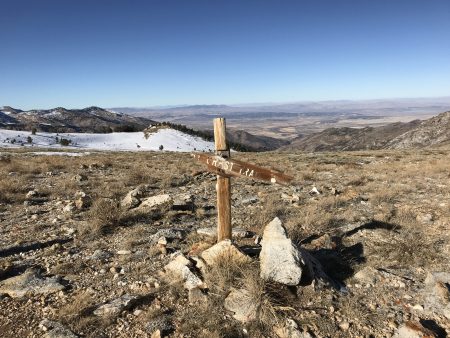 Sure, there were lots of reasons to smile: the three of us were finally high up in Nevada’s Ruby Mountains running the Ruby Crest National Scenic Trail after months of planning and more than a few Fall weather delays; it was a crisp, blue-bird day with just enough snow on the north facing sides of the trail to make it interesting but not enough to piss us off; we weren’t lost, at least not totally lost; and we had a fully stocked camper waiting for us 40 some odd miles away at the southern trailhead. There were actually lots and lots of reasons for Audrey to smile. 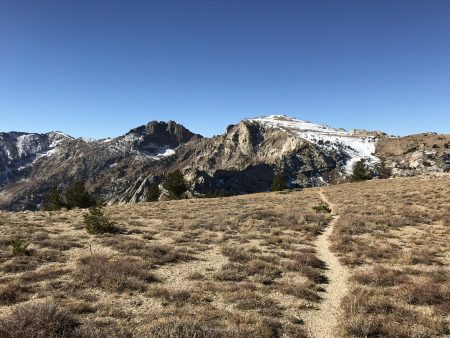 But the root cause of the unexpected smiles and laughter was Audrey’s sudden realization that she was actually running in the Rubies with Bob Dylan. That was me, Bob, and our running compadre, Dylan. Audrey was all smiles and giggles, like a kid discovering an unopened package of Oreo cookies in the cupboard, no parental figures in sight. 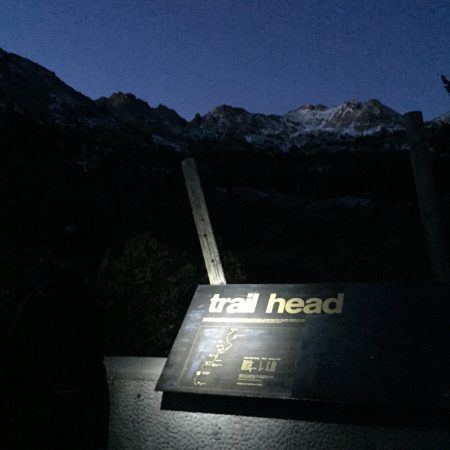 Talking about a trip to run the Ruby Crest Trail is really quite fun. Nothing to it, just grab a small group of running buddies, drive across Nevada, park one car at the finish, drive another car back to the start with a big lunch (maybe a little dinner thrown in) and run. Fun! Implementing that same trip was something less than fun. It took us months, literally months, to finally get into the car and start driving. When we first threw out the idea of running the Ruby Crest, early on during last year’s summer running season, everybody wanted to go. Who wouldn’t? Forty plus miles from end to end through the magnificently remote Ruby Mountains Wilderness Area, the Ruby Crest Trail is (or should be) on every ultra runner’s bucket list.

We chose the North-South variation and started our run in Lamoille Canyon. The Lamoille trailhead is situated at 8,780 feet and is about an hour’s drive from the town of Elko. Our late October start date meant that we had some snow and ice to deal with (in some places the snow was knee deep through breakable crust!), but the south facing sections of the trail were surprisingly sunny, warm, and dry. Starting in Lamoille and running south also meant that we would get the majority of our climbing out of the way early in the day (Wines Peak, the 10,893 foot high point on the trail is 8 or so miles from the start) and spend the rest of the time casually running downhill (yeah, right) to the Harrison Pass trailhead which is situated at around 6,000 feet. 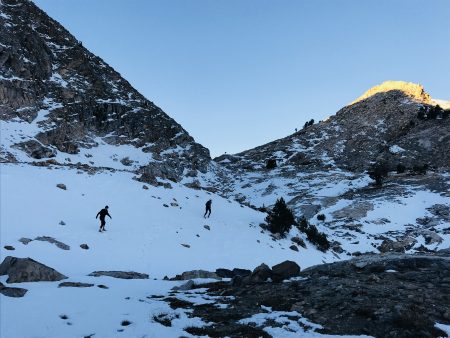 With headlamps, full packs, and full bellies we set off from the Lamoille Canyon trailhead in pre-dawn darkness. It wasn’t exactly easy. We were cold, a little groggy, and nervously excited about the mysterious 40 miles that lay ahead. As we worked the early morning kinks out, adjusting shoelaces, shedding layers, visiting the bushes to drain coffee-filled bladders, and questioning the sanity of running in the dark on ice, the sun broke over the far horizon and illuminated the peaks towering above us. Slowly but surely the pinks and lavenders and oranges of the early morning sunshine brightened the granite all around us. It was simply magnificent. I actually shed a few tears. Because I couldn’t feel my frozen fingers or my left big toe. 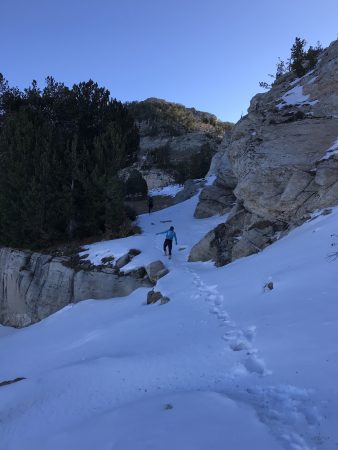 After two or three miles of steady switch-back climbing we reached our first pass and saw the thin ribbon of Ruby Crest Trail unwind into the distance. High above tree line, there was nothing but blue sky above and single track below. It was a pattern to be repeated throughout the first 20 miles of the trail; climb steep, shady, and snowbound north-facing slopes, top out in the brilliant Fall sunshine, and then blissfully wander down the crest towards the next pass. 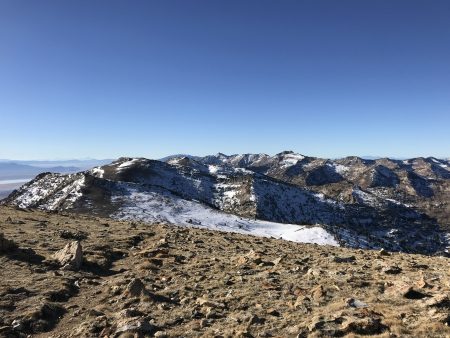 Most of us know that Nevada is defined by Basin and Range topography. And many of us know (especially those of us who have Wikipedia open on a separate web page right now) that Nevada is the most mountainous state in the US; there are more than 150 individual mountain ranges in Nevada. If you’re in Nevada right now, you’re either in a mountain range or you’re in a basin. And when you’re standing on top of Wines Peak (10,893 ft) looking south, you see the enormity of the Ruby Mountains in front of you, the flat and expansive Ruby Valley Basin to your left and the equally flat and expansive Crescent Valley Basin to your right. It’s damn near impossible not to feel like Kate Winslett and Leonardo DiCaprio on the bow of the Titanic. Is that Celine Dion singing in the background or Dylan blowing his nose? Hard to tell, they’re both so melodic. 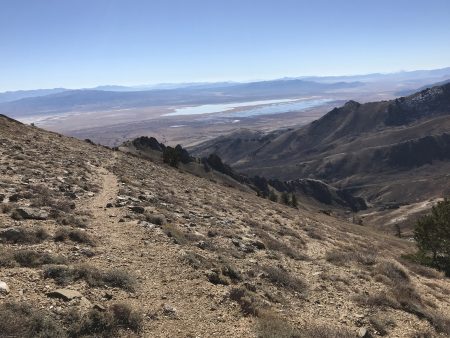 Somewhere in the distance was Overland Lake, our halfway point on this run. If you look up “Ruby Crest Trail” on your web browser it won’t be long before you’re looking at a picture of Overland Lake. It is the quintessential image of the Ruby Mountains; a painfully blue, high alpine lake, sitting tentatively among jagged granite peaks as though it might just spill over it’s eastern bank and evaporate in the basin below. To get to Overland Lake (and the lunch waiting in our packs), we traversed the spine of the Ruby Crest Trail. This section was absolutely stunning. We were bathed in sunlight and stripped down to shorts and t-shirts. THIS WAS OCTOBER 28th! AT 10,000 FEET! We couldn’t believe it. At one pass I topped out just ahead of Audrey and Dylan and stood face to fuzzy face with a small herd of shaggy, white mountain goats. I screamed. They screamed. We all screamed for…Unfortunately they scampered off before I could snap a photo of them. 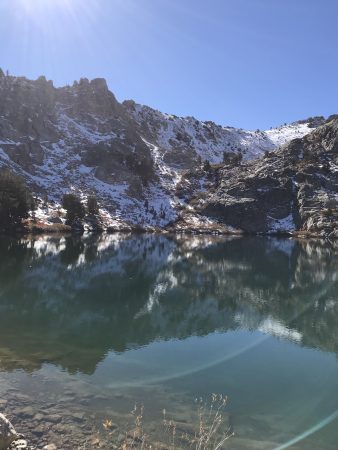 A few miles before Overland Lake the trail drifts off the crest and descends down the eastern flank of the Ruby Mountains. This section of trail was hot. Actually hot. As in temperature and not People Magazine skimpy bikini, six pack ab Chris Hemsworth hot. Again, we were running at the end of OCTOBER! After dining on the shore of Overland Lake, we climbed up a steep, snowy, talus strewn slope and topped out at yet another 10,000 foot pass. Then things got a little interesting. We could see the trail, sort of, descending off into the distance but it didn’t quite look right. Or rather it didn’t look like it was going in the right direction. Or at least the direction that we thought it should. Consultations with the GPS unit proved fruitless. It merely told us that we were the little blue triangle, right there in between squiggly black lines. We weren’t lost. Definitely not lost. But… 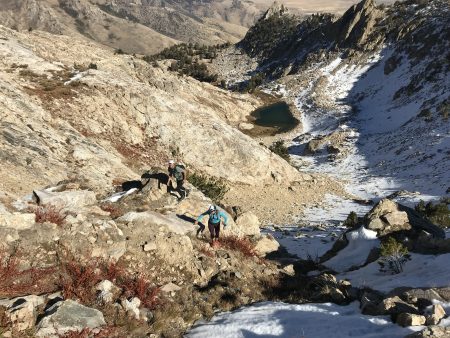 An hour or so later we were entangled in unbelievably dense aspen and alder groves, barely able to move forward, sideways, or backward. Rarely more than 10 or so meters apart, we couldn’t see each other, but we were able to locate each other by following grunts and groans and occasional bouts of severe swearing. We were echo-locating like drunk dolphins or motion sick bats craving Dramamine. We took a “short cut.” Yes, that shortcut that we all know and love. The one that results in bloody legs (me), wounded prides (me again, navigator with the GPS), leaves (Audrey), and pine needles (Dylan) in our hair. 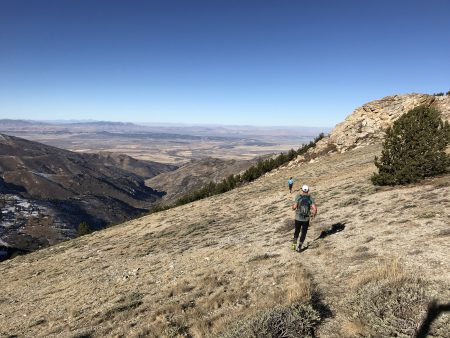 Finally we rejoined the trail proper and began a long westward descent into the Smith Creek drainages. We still had some 10-15 miles to go but already we could feel the sun dimming toward the western horizon. It was at this point when we fully realized how lucky we were to be running south instead of north. We were taking full advantage of the short October day, we had sunshine in our faces, and we were generally going downhill. At least when we weren’t going uphill. 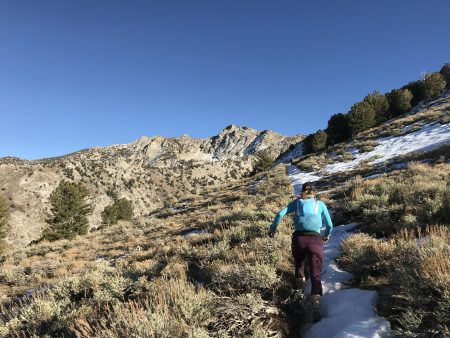 This lower, southwestern portion of the Ruby Crest Trail is far from the granitic highlands of the first 25 or so miles out of Lamoille Canyon. This section was mile after mile of aspen groves down low and pinyon-juniper woodland up a little higher. We were long past peak Fall color season, but this section must be ridiculously beautiful when the leaves are turning. To be honest, at this point in the day, and after 35 or so miles, I was teetering between ambivalence and misery. I didn’t really hurt anywhere specific, I felt a dull ache pretty much everywhere, and I wasn’t really bored, but I had certainly lost the magic of my Kate and Leonardo moment from earlier in the day. If Audrey would have stopped and said, “…That’s it, I’m done! I’m calling a helicopter…” I would have gladly buckled into the seat next to her. 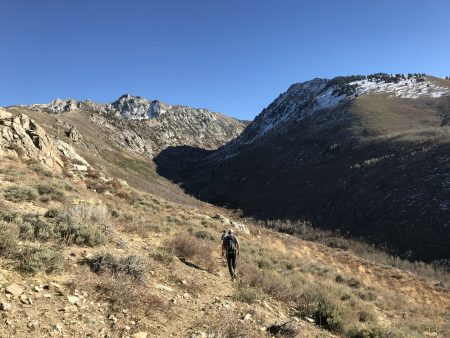 And then suddenly the three of us were standing face to face with the southern trailhead. Or at least a sign saying that this spot was the southern trailhead. We were kind of baffled. It wasn’t really anticlimactic because we were pretty thrilled with our little adventure, but it wasn’t exactly like the finish line of the Castle Peak 100 either. No cowbells, no applause, no Helen. But the sun was still up, we were officially finished with the Ruby Crest National Recreation Trail, and according to the GPS unit we were only four miles away from the camper and all the chips and beer we could stuff into our bodies. Only four miles… 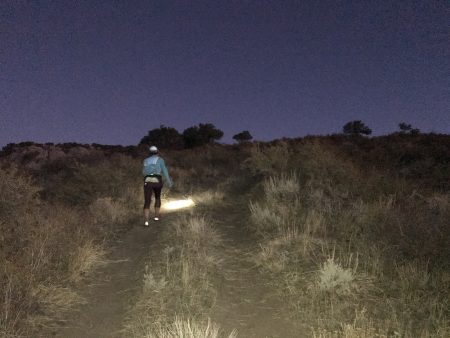 Two and a half painful hours later, in pitch black, with headlamps on (except for Dylan) and blisters blazing we finally found the camper. It was the longest four miles of our collective running careers. And it wasn’t our fault.

We did a lot of research about the Ruby Crest Trail before our trip. We read damn near everything we could find about the route. And nowhere did it tell us that when exiting the Ruby Mountains Wilderness Area we should expect to find a spaghetti network of Jeep roads that, when viewed from above, looked like a splayed ball of yarn. It was a maze. Left? Right? Straight? We had no idea which option to chose. It was only four miles, how bad could it have been? It was horrible. We followed the GPS, it got us lost. We went downhill because that was the direction our legs wanted to go…we had to turn around and go back uphill.

In the end we did what all lost runners should do; we followed Dylan. Never travel without a Dylan. That man has an uncanny ability to find a camper in the dark. Don’t follow a Bob. He’ll surely get you lost and you’ll end up with bloody legs. Follow a Dylan. Never mind the pine needles in his hair. 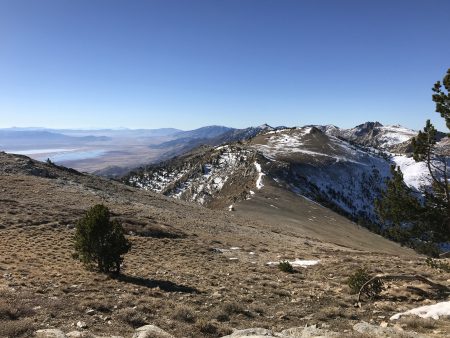