#200isthenew100, everyone wants to do one. So much so that there were double the number of entrants (one for every mile) in the 4th go-round of the Tahoe 200 race this year. The runners start at Homewood on Friday morning, and end there 205.5 miles, 35k’ of ascent/descent, and any number of hours under 100 later. Along their journey around the lake and into the night (and 2nd night, and 3rd night) they visit a dozen aid stations, each one a little oasis of gu’s, friendly faces, and leukotape. I had the pleasure to work the Sunday graveyard shift at the Brockway BnB aid station (presented by the Donner Party Mountain Runners).

The folks I witnessed there were incredible. The grit and toughness of a multi-day push with little to no sleep, questionable food choices, on their feet for many hours dealing with proper hydration, blisters and other ailments– and all the while upbeat, enthusiastic, agreeable, and kind. The runners weren’t bad, either. While the details are fuzzy, the memory of a great time had by all, the helpfulness and caring of the volunteers, and the badassery of the runners is vivid. 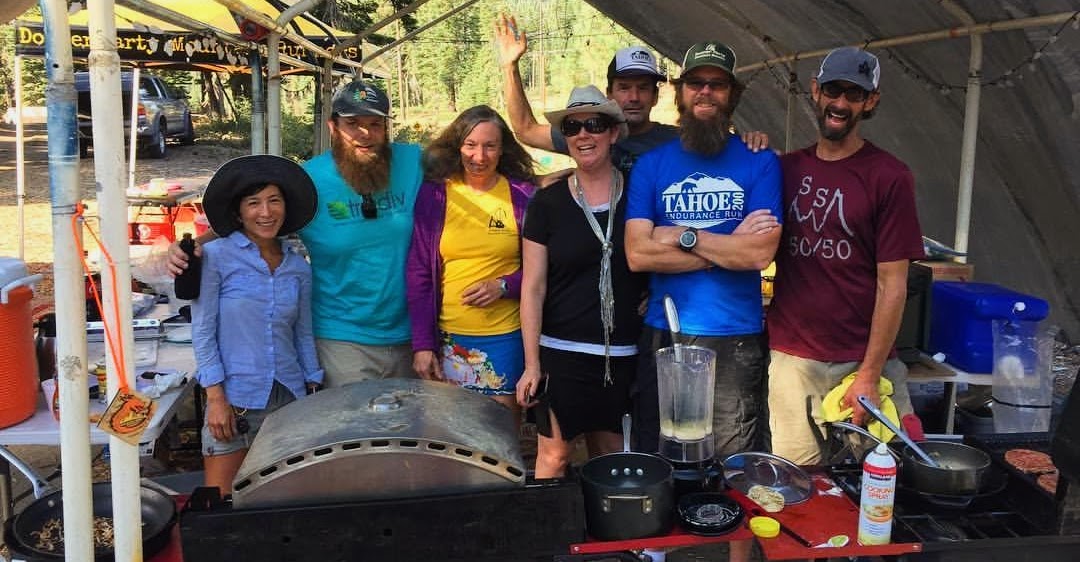 To host an aid station at such an advanced distance (155.4 miles into the course) for 200 runners who are by that point spread out for dayzzzzz is no small feat when you’re prepared and ready to roll. But when you’re prepared and ready to roll and at that moment your truck gets stolen with your dog and one of the aid station-bound couches in it, a whole ‘nother level of organizational wizardry is required. Our captain, Mike Tebbutt, and his co-pilot, Liz Tebbutt, have lived to tell another story about Jackie dog’s retrieval (unharmed), 30 hours and 15 miles away from the scene of the crime. The mad search was a testament to the power of social media and the Tahoe community, as Mike’s post was shared by hundreds of people across the North Lake interwebs and took on a life of its own.

I wasn’t there for the first 24 hours of the Brockway BnB setup (unrelated to the T200, I camped at Marlette with friends and held a mobile cheer section all the way to Spooner the next day), and the carnage is better as the days progress. I heard that the front runners zoomed through at 5am on Saturday, but my account begins (as I recall it 3 weeks post-event) only on the 3rd night. 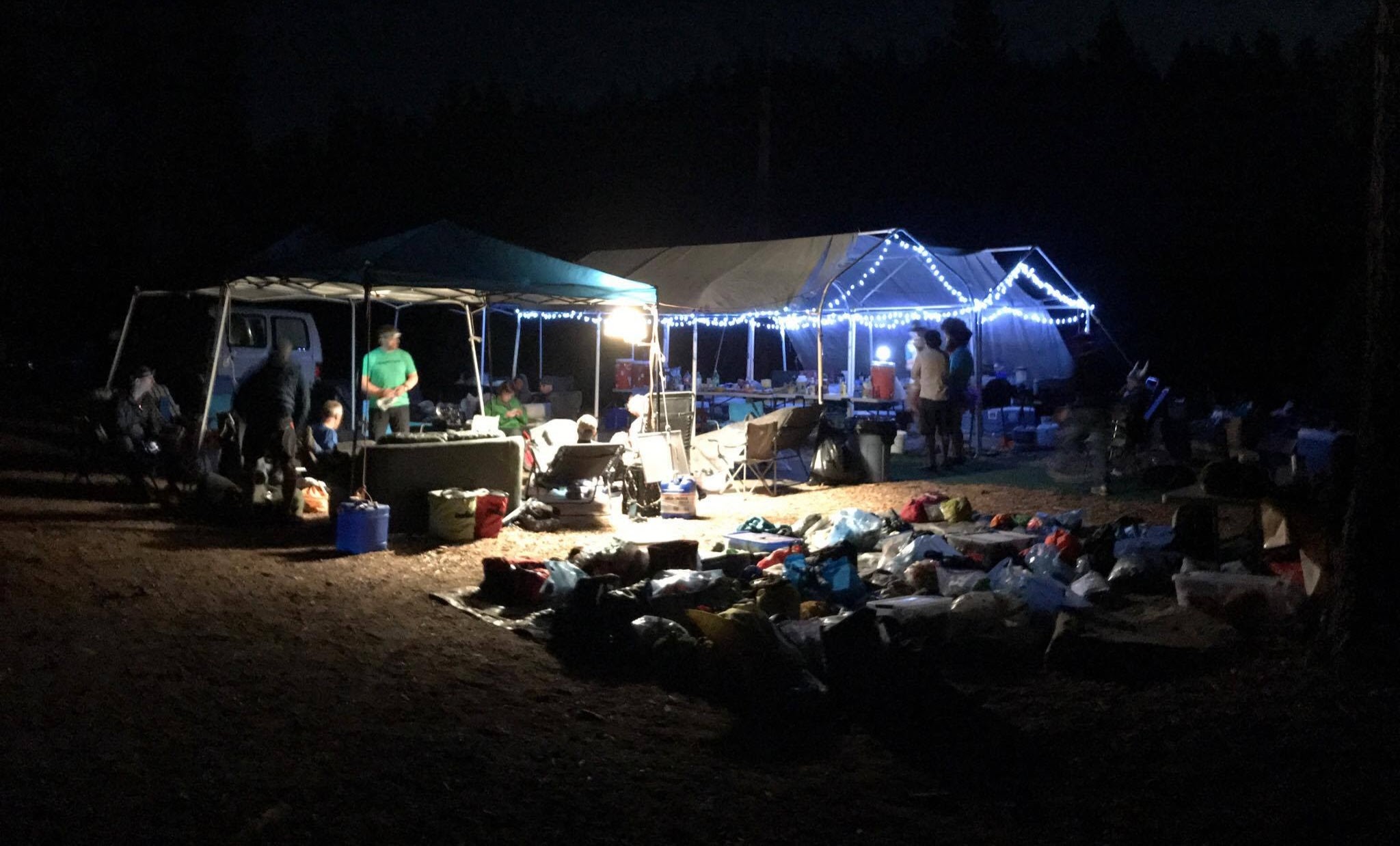 8 pm, Sunday, nightfall: I arrived to see (by the last glimmers of dusk) the most plush aid station I’ve ever laid eyes on. Cozy couches and recliners around heat lamps on rugs, chaise lounges under easy-up canopies, and only a sprinkling of playa dust. Someone shoved a dixie cup of homemade ice cream in my hand, and asked that I hold a makeshift blanket shower curtain for a female runner (#thechafingisreal) as she ordered her meal. The other side of the shower was made out of an extensive costume rack. JP Prince, who’s been holding a clipboard in his hand for a good portion of the last 3 years, greeted runners and recorded times in/out.

9 pm: Speaking of ordering meals, the second B in Brockway BnB was true to its name – it was breakfast for breakfast, breakfast for lunch, and breakfast for dinner. The eggs benedict station was manned by Jason “Hotdog” Dumars (also known as the 19th ever finisher of the inaugural T200) and brother Dusty, who slinged Palmiers with homemade custard. The pair peeled 100 eggs in advance of arriving for quick assembly. The dubbed-by-many-a-runner “best ever” homemade chicken soup station was staffed by Andrea and John Ross (Tebbutts-in-law, Liz’s parents), whose culinary mastery extended to regular, gluten-free, and even vegetarian chicken soup (the chicken was prepared separately).

10 pm: Equally as popular a service with “just” 50 miles to go was the medic station. All the way from Tennessee, volunteer medics Kathleen Foster-Wendel (a pediatrician) and her daughter Mara Wendel Tugel (a veterinarian – appropriate type of doctor as all the runners drew out their #beastmode for the race) patched raw skin, taped weary bones, and relieved cramped muscles. Non-foot chafing issues were a self-serve kind of deal. Official expert medic service was supplemented by equally as expert foot washing and massage by Sam Skrocke and Kathy D’Onofrio (who herself finished 3rd at last year’s T200). These folks literally revived multiple runners’ feet to continue onward to a finish.

11 pm. It was now several hours past my Tahoe bedtime (I go to sleep when it’s dark), and the sleep station down a dirt road behind the aid station was in high demand. Liz Tebbutt recorded those who went to sleep there, or in their car, or just on one of the couches, and their preferred wake-up call. On the tracking app it looked like some runners were hanging out on the shoulder of Hwy 267, but really they were sleeping on cots off a parallel to the hwy dirt road. 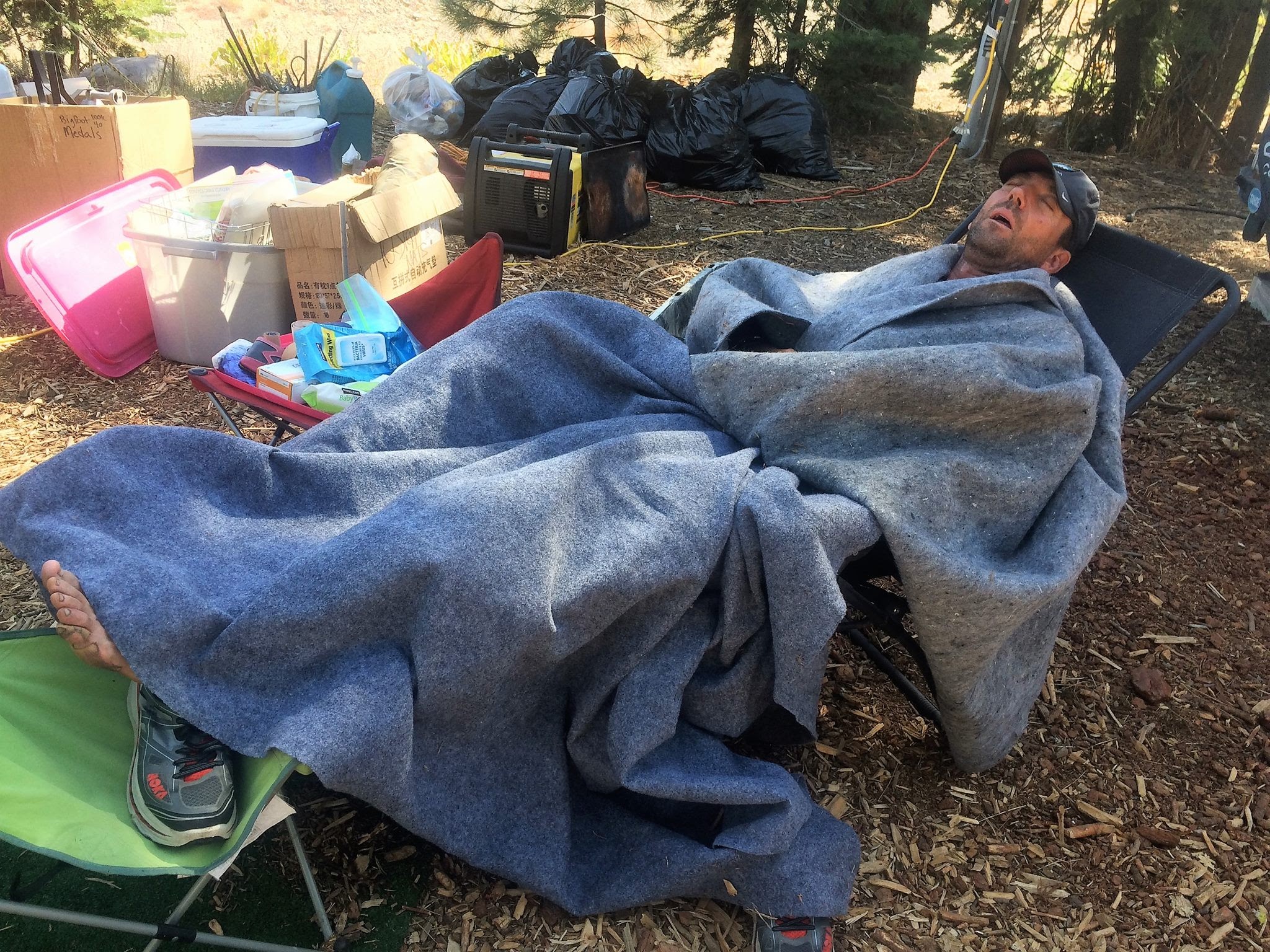 12 am, Monday: Without the tracking app, this race would be preeeeetty boring for the rest of us. Luckily, we were able to know exactly who finished, on what section our favorite DPMR runners are leapfrogging each other, and how many participants are lost somewhere on Martis Peak (no full-moon rave this year over there, so not sure why they went that way). The only party on Martis was the one-man search party of Sam Skrocke on his mountain bike correcting the flags, and Joel Tebbutt doing search and rescue earlier.

1 am: Some runners were starting to get loopy and delusional, especially those running by themselves in their 3rd dark night. Sean Flanagan counseled a runner who saw a little girl in the woods, and the little girl told him he’s going the wrong way, so he followed the flags #yeahsuredude. Sean filed that experience away with other reports of seeing chickens and Jim Morrison. Some runners claim they had to wait 30 minutes (!!!) until a bear family with two cubs got off the trail #truestory. A runner from Mexico told of his evening training in Parque Ecologico Chipinque where bears would tap you on the shoulder if you “put any candy in you bag”. Needless to say, those who seemed in a worse off shape were advised to take a nap before continuing.

2 am: A custom flair for Brockway BnB was your own on-demand exit song and walk-out party. The speaker suitcase was wound up and walked to the end of the driveway with each exiting runner, whether it was to the Frozen soundtrack or to gangsta rap. One of the most acclaimed performances was a Metallica rendition (air guitar and all) by a runner from Japan (this being his 3rd day ever in the US). The walk-out party was not fazed by a cranky lingering runner who demanded to turn off the music and kill the fun for all others, though they politely turned down the volume.

3 am: Some of the runners rolling in at this point were recognizing each other from doing another 200 miler just the month before (Bigfoot) — and maybe shooting for a 3rd 200 the following month (Moab). These triple-crown-hopefuls are a level above endurant, but so are the volunteers who have staffed the Brockway BnB for the past 36 hrs with 12 more to go: Ginny LaForme (who had rotated between all the many station tasks), Eric Robinson (who, instead of taking a sleep break, completed a nearby Nav-X orienteering course), and Jackie doggo, who has since been renamed Carjackie to reflect her weekend escapade. 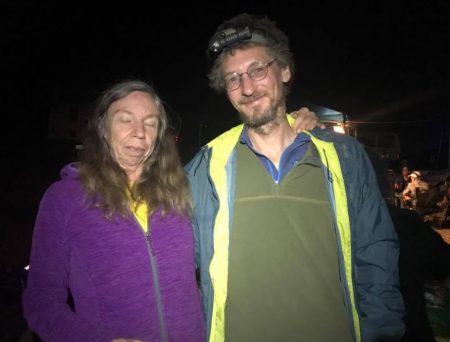 Ginny is getting veeeeery sleeeepy. Eric is not. [photo: Mark Tanaka]

4 am: Our own local Donner Party club members started to roll in around this time. At the bottom of the hour, Naomi “I slept 6 hours before halftime” Plasterer and her pacer Steve “I run with chocolate muffins” Rowbury entered the scene, and surprised everyone with how fresh and cheerful they were feeling after the many miles they logged. Naomi took a nap in a van and wound up finishing 10th female and 1st in her age group at the end of the race. I’ll give partial credit to the four PB&J sandos I shoved in her jacket pockets at Brockway. Steve ended up pacing for over a quarter of the race and keeping spirits high.

5 am: Minutes later on the other side of the hour Julia Millon (a veteran of the Brockway aid station) made an entrance, unfortunately with back spasms after a super strong performance up to that point in the race. Earlier, Mike Tebbutt fussed about 30 minutes around the costume rack, perfecting his Julia-greeting outfit, finally settling on a black corset and a pair of stylish orange fuzzy fur leg warmers, and went out to the TRT to run in with Julia. Julia’s crew included an array of DPMR pacers (including Lesley Dellamonica, who after pacing to Spooner came to work at Brockway BnB) and Spike Wimmer, famous for his mad med skills and also for narrating Julia and Naomi’s journey for the past few days with video clips from various trailheads.

6 am: At zero-dark-30 a few of us got to practice negotiation skills with miffed logging trucks and crew vehicles who seemed to want their sideview mirrors torn off by said trucks as they continued parking in the most inconvenient spots in the truck’s path. The trucks have been coming around since 2am (it’s crazy, the hours they keep over there on Fiberboard Freeway), and I’ll give them props trying to navigate very tight turns around all the crew cars. Aid station volunteer known/dressed as Dr. Bacon in previous years got the loggers under control, and Kelly Barber (who flew in minutes before from Wasatch 100 and a Grand Slam of 4 100s in 2.5 months) handled the rest of the parking sitch. 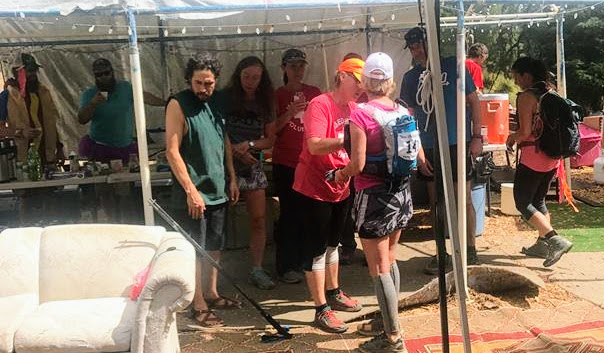 Hotdog, Dusty, Bacon, Ginny, Mara, and the sweep for the next section. [photo: JP Prince]

7 am, daybreak: I’m sure something interesting happened at 7am also.

8 am: As the runner crowds thinned, so did the dropbag queue. Eric, Ginny, and I went through the bags with the help of JP and his clipboard, but the tracking app showed a whole bunch of phantom drops. Runner would leave Tunnel Creek, their crew would send them on their way and go to Brockway, but the app would show them as drops (though the individual map would show them on the Powerlines, and nowhere to drop between there and Brockway) #technology. Some other runners weren’t going to come through anymore (real drops for reported reasons such as – “acute butt chafe due to tights — but it was fine on my training runs!”, “my husband dropped so I did too, we’re doing this together”, etc). 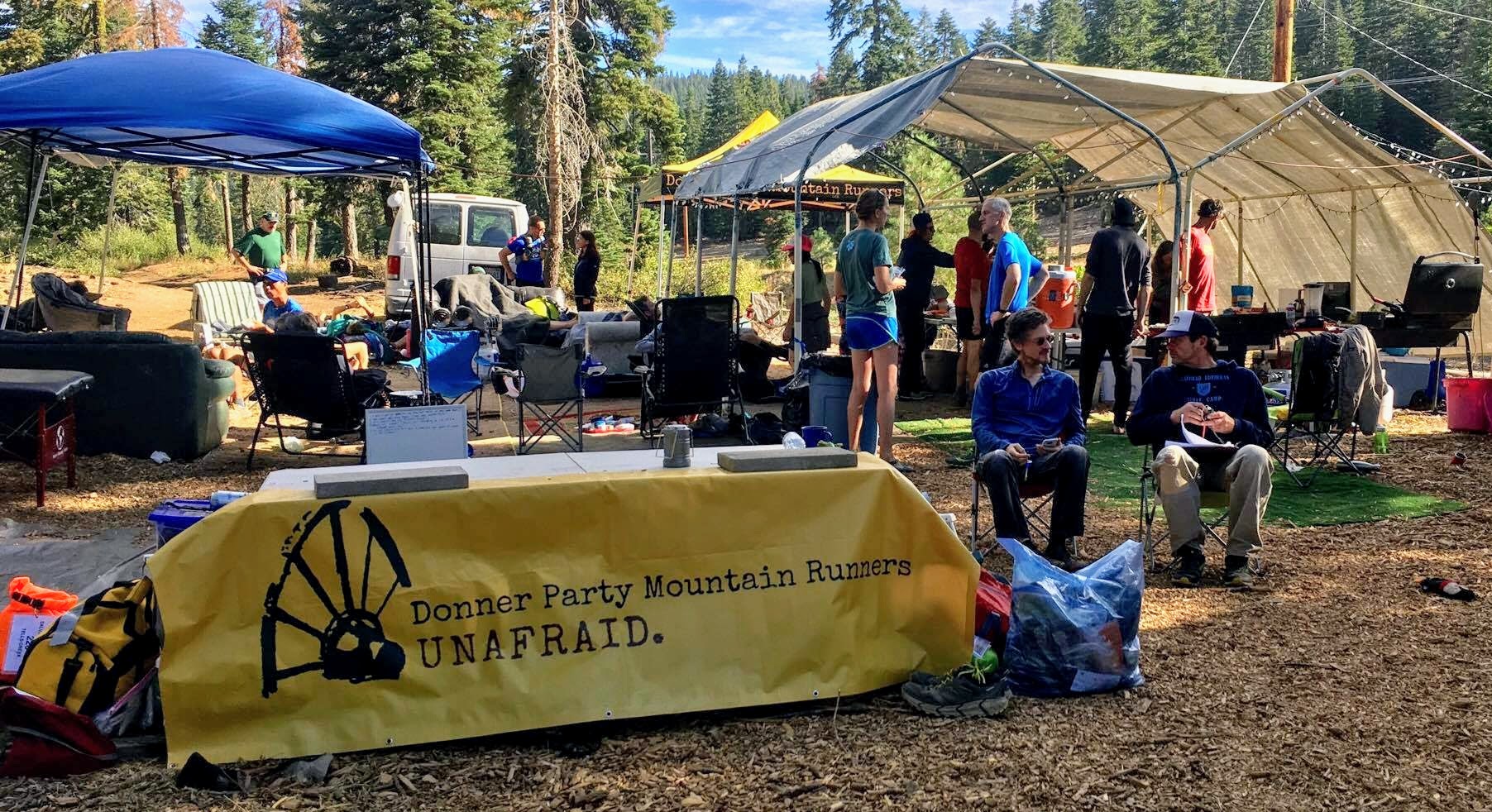 9 am – 2 pm cutoff: The last hours are a blur. There was bacon and eggs, runners trying to beat the clock, runners who dropped several days earlier coming to get their drop bags, and a whole lot of cleaning up. Thank you to all the volunteers and organizers for a fun 48 hours for both runners, pacers, crew, and everyone else who was there. Looking forward to next year!

What are you waiting for? Register for Racing Gnom

Get to know Martin Benes, our Member Highlight for

Join us for our annual Racing Gnome Snowshoe on Fe

Still looking for some holiday gifts? Show off you

Looking for some reading while you cosy up inside