I recently experienced the impact of snow on trail and ultrarunning in two very different ways.  I’ll recount the first here with the second to follow next month.  On June 17th, I ran the Broken Arrow Skyrace 26k.  I was aware that there was snow on a significant percentage of the course but hadn’t done any running that properly prepared me for it.  It was my first time running this race and I had been forewarned that there was plenty of vert.  My hope was that my training for The Canyons 50k on April 29th would give me a solid base that I could maintain in the intervening seven weeks to tackle the shorter distance at Broken Arrow.  Unfortunately I fell twice at The Canyons and banged up my knee, which required taking almost two weeks off and reducing my mileage in May.  Nevertheless, I was excited by the prospect of running up and down the trails and slopes at Squaw despite or maybe because of the challenges presented by snow and altitude. 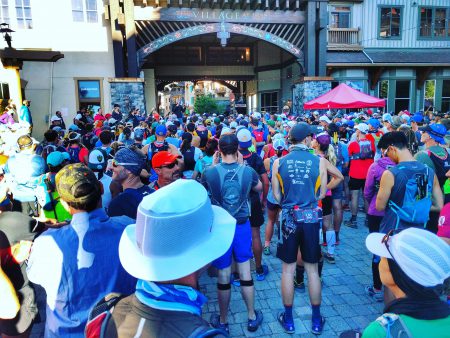 The morning was clear and warm, perfect for running.  Excitement was high in the Village at Squaw and I enjoyed seeing many familiar faces and chatting with DPMR members Sharon Fong, Lesley Dellamonica, Jon Emis, Andy Pasternak, and JoAnn Elero as we waited for the gun to go off.  The first section of the race was slow going due to the combined start of the 54k and 26k races and the snow melt, which turned the lower trails into flowing streams.  The pack was slow to spread out, which I found frustrating as I knew the initial sections of the course would be the most runnable.  I heard Kwai Chang Caine’s voice in my mind: “Patience, young grasshopper.”  When I emerged from the woods at the ski area boundary and saw the Lake View climb 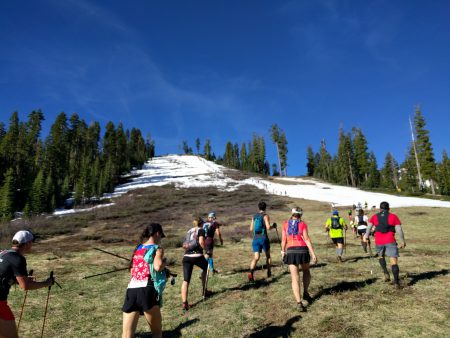 I knew that the real race was about to begin.  Other runners had the same realization as trekking poles and microspikes were deployed by many at this point to aid with the climb.  The sun was now taking on an adversarial role as the temperatures steadily climbed and the snow reflected the glare.  Two summers ago, I ran from the Western States trailhead off of 89 to the top of the Red Dog lift so I knew that the climb would be steady and rewarding in terms of the views but the snow made the going much slower than anticipated.  I was thankful for having poles but wondered if I would’ve fared better with some traction devices on my shoes (the answer is a resounding yes).  It was clear from the remarks of the runners around me that, like me, many had never run/climbed in such conditions. 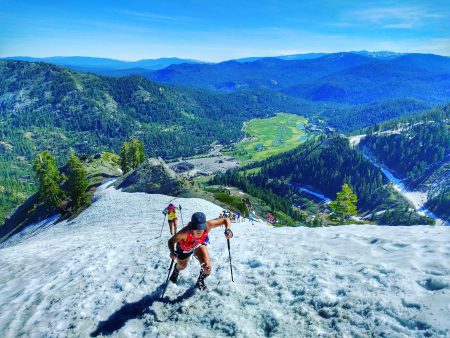 Our collective breathing was labored but the stoke was high based on the comments marveling at the stunning views and, of course, the number of selfies taken.  The undulating trail along Snow King was fairly runnable, especially as compared with what awaited us later on the course.  I was glad to encounter Gretchen Brugman as we left the Easy Street Aid Station.  We ran together on and off up Red Dog Ridge, KT-22, Headwall, the Stairway to Heaven, Squaw Peak, and down to Shirley Basin.

I’ll pause here to say that by about 10 or 11 miles into the race, my tank was near empty.  The snow had taken its toll on my legs and the heat had sapped my energy.  In retrospect, while I did ok on hydration, I should’ve eaten more calories throughout the day.  There were three aid stations that were well stocked in terms of water, electrolytes, Cliff Bloks and the like but I seemed to have missed the PBJ sandwiches, watermelon, potatoes, M&Ms and chips that are a regular part of my in-race diet at longer races.  Mentally I was ready to be done by the time we reached the top of the Shirley Lake lift but I soon realized that I was not quite home free when a course marshal directed us down toward Solitude instead of High Camp. 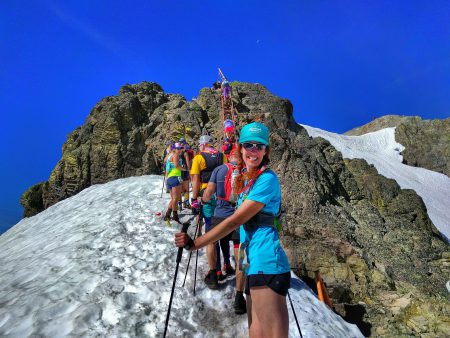 I did not need this additional loop, which seemed to have the deepest snow on the course and I cursed the race organizers as masochists more than once on the climb out.  I was jealous of the shorts- and bikini-clad skiers and boarders who moved effortlessly across the terrain in a downhill direction and who had the luxury of riding up the lift.  The unique conditions and scenic beauty were no longer sufficiently distracting.  I was now in get it done mode.  The climb back to the top of the Solitude chair seemed interminable but it finally ended and I was so grateful to see the yellow and black DPMR canopy shimmering like an oasis in the distance.  Julia Millon, Sean Flanagan, Spike Wimmer, and Helen Pelster were among the welcoming faces ready with encouraging words, cold sponges, and replenishing drinks.  Having run the Squaw Mountain Run, I knew that it was literally all downhill from there.  I was glad to be running on dirt again as I let gravity pull me down the final three and a quarter miles to ring the bell at the finish line.  In summary, I highly recommend the Broken Arrow Skyrace as a unique local event that is well-organized, challenging and rewarding.  Next up, my observations of the impact of June snow on runners at Western States.