My CIM weekend was a solo mission this year.  In years past, my husband Abe and daughter Sawyer have come with me to Sacramento for race weekend.  Sawyer is clearly a Truckee kid as evidenced by her enthusiasm for exotic contraptions such as stop lights, flashing cross walk signs, elevators, and escalators so the opportunity to stay in a hotel is pretty much a highlight for her (I swear she actually travels quite a bit and we don’t keep her locked up in our basement).  This year, however, mandatory ski team clinics and practice took priority, so mama got some alone time before the race.  As I drove out of our driveway Saturday afternoon, I was secretly excited to have a bit of time to myself.  Why you ask?  Well, in the last twelve years I haven’t been able to sit on the toilet or take a shower without a dog and/or a kid scratching or knocking on the door (assuming I remember to lock it) or just letting themselves in and staring at me, talking to me or even just climbing right into my lap (assuming I forget to lock).  I’m sure I’m not the only person out there with this problem (come on admit it, you know what I’m talking about).  I digress – back to the point…..

I arrived in Sacramento at about 2pm on Saturday the 3rd, checked in and immediately headed to the expo to get my bib.  The expo is held in the Sacramento Convention Center and is fairly large but well organized.  It’s crowded and, as it should be, full of energy and excitement.  Strategically positioned, bib pick up is on one side of the expo while shirt pick up is on the opposite – they don’t want you to just go in and get your bib – oh no, you must navigate the chaos of the expo and have maximum exposure and potential for retail purchases.  Halfway from the bibs to the shirts, I was stopped by a lovely couple with the following “oh my god – look honey, she has the rose gold Fenix3!”  Commence five minute geek-heaven conversation about the features and attributes of our 3 different Garmins.  Anywhoooo, after bidding the Garmin couple goodbye and good luck, I collected my shirt and promptly left the expo.  Just like my daughter, it’s clear I now live in Truckee as evidenced by my aversion to large crowds and ease of becoming overstimulated by bright lights and loud noises.  Why am I running a huge road marathon?

After retreating to my room and laying my clothes out for the next day, I turned on the TV, flipped through the channels and low and behold –  Katniss Everdeen and Peta Mellark were running and diving across the screen in all their Hunger Games glory.  Yes, the entire Hunger Games series was being shown – what would be better to watch right before going to bed?  Nothing!

Jenelle [Potvin] called on her way home from the Western States Lottery to wish me good luck and give me some good advice.  At one point I said “If I don’t puke or crap my pants, it will be a good day”.  Her response:  “I’ve crapped my pants at a race and Helen [Pelster] has too.  Go for it!”  My response:  “Yeah, crapping your pants to get on the podium might be worth it; I don’t think a four hour marathon finish amongst thousands of people justifies it”.

I tore myself away from the Hunger Games long enough to venture downstairs to get some dinner at the hotel bar.  It was great – they had a CIM menu which included pasta, rolls and salad (+a glass of wine if I’m being honest).   Oh, I should mention that I stayed at the Sheraton Grand which was phenomenal due to the CIM specific offerings.  After scarfing down my food, I ran back to my room – I didn’t want to miss a moment of Katniss and Peta.  I promptly got into my king size bed, assumed the starfish pose so as to maximize my body to mattress coverage ratio, and settled in to watch.

Fast forward about 6 hours – my alarm clock went off at about 3:45am.  I actually slept through the night – a highly uncommon thing for me especially in strange places and before races.  After getting dressed, I went back downstairs to collect my pre-ordered, CIM specific breakfast to go (coffee, water, a banana and oatmeal).  Low and behold the Garmin Couple from the expo shuffled in right behind me.  The shuttle bus picked a few hundred of us up right across the street from the hotel entrance which made for some warm waiting and easy timing.  The bus picks up at 5:00 AM.  The race doesn’t start until 7:00AM so you have some time to relax, listen to music or eaves drop on the people surrounding you.  I passed some of the time by re-reading my race-day strategy from Coach Peter.  After that was done, I needed to report in to Jenelle (yes, we have a strange relationship). As such I sent her the following text once on the shuttle bus to the start:

Since we’re on the subject, another thing that CIM does very well is porta-potties.  Runcim.org boasts “More porta-potties per runner at the start and along the course than any event the CIM staff and board has ever seen!”  This is important.  It’s a road marathon in a city so pulling “off trail” isn’t easily done.  You’ve got to take care of  business before the start or you can lose a lot of time trying to find an alternative on course.  Ok so enough on the facilities.

Finally, at about 6:45am everyone started falling into place behind the starting arch.  There were several pace groups and I landed somewhere in between the 3:30 group and the 4:00 group.  I didn’t actually want to run with the pace group but per Coach Peter, “get out and stay ahead of the 4:00 pacer, if they catch you, don’t let them lose you”.

The anthem was sung and the race started at 7am.  The CIM course is awesome in that there are a ton of spectators lining both sides of the course pretty much the entire way.  It’s pretty much the polar opposite of a trail ultra but exciting and fun.  Miles 2-6 meander through an area that is a bit more rural and has a bit of horse property.  Right about mile 3ish, there was a gorgeous brown horse putting on a show as we passed – gracefully prancing with mane and tail flowing, nostrils flared, confident and graceful.  I took in that image and swore I’d try to remember it and channel that horse as I ran the rest of the way.  As much as I’d like to say that I succeeded in this, I think I only managed the flared nostrils part.

Anyway, I knew I’d slow down in the second half of the marathon so I wanted to get out ahead of my four hour target pace.  I went out fast but at a pace I felt was sustainable for at least 15 miles.  About five miles into the race, I get the following text messages (no, I wasn’t looking at my phone, I get them on my watch so it’s easy to see while running). 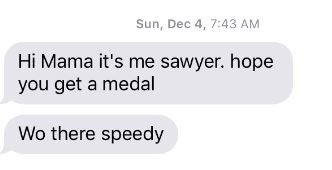 The first, was clearly from my daughter and the second was from my hubby.  I got a little chuckle from both of their comments.  Did Abe mean “Whoa there, speedy” as in I was going out too fast and to slow down or did he mean “Wow, speedy” as in nice job, keep it up?  He knows me well enough to know that if it were the former, it would motivate me even more to keep the pace.  So, either way, I decided I’d hold the pace as long as I could.

I ended up running my fastest half marathon ever at 1:53 or an average pace of 8:38/mi.  I felt great and wasn’t noticing any discomfort in my legs or lungs.  I started to slow down a bit beginning in mile 16 but still in the 9-9:30/mi range.  With the exception of a pee break in mile 17 which added 2 minutes to my time overall – yeah waiting for a porta potty sucks but I wasn’t going to drop trou in the middle of the spectators on the side of the course.  So maybe now you understand why plentiful porta potties are pleasing.  Coincidentally, or maybe as a result of my little potty break, I hit my wall early at mile 17.  My hip flexors started to hurt and I was feeling a bit fatigued.  I knew it would pass and it did.  The nagging hip flexor pain disappeared and was replaced by migrating discomfort in various places from my knees to my back.  None of it lasted for very long and generally worked itself out as I continued to run.  With about 45 minutes left to go, I got the next motivational text from Abe which definitely helped to get out of my own head for a bit.

I knew I was slowing down beyond a 4 hour/9:09/mi pace so I started doing mental math. As long as I stayed at or under a 10 min mile from here on out, I would finish under 4 hours.  So that’s basically what I did.  I spent pretty much the remainder of the race, obsessing over my watch and re-calculating my estimated finish time and required pace to hit my goal finish.  About 2 miles from the finish, the 3:58 pace group caught me which lit a fire under my ass.  Per instructions, I stayed with them through the finish, crossing the line in 3:58:32.

It was both the most exciting finish I’ve had due to the PR and the most anticlimactic due to the fact that my family wasn’t there to celebrate with.  There’s nothing better than hearing Sawyer scream “Mama!” and run out to join me in crossing the finish line.  My quota for alone time met, I retrieved my drop bag and walked back to the hotel as quickly as possible.  I wanted to get home to see my family. 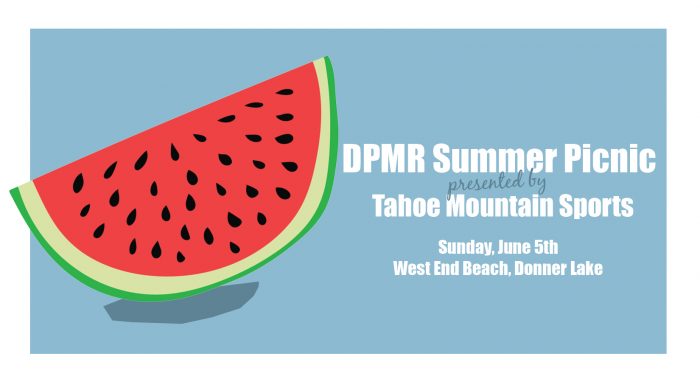