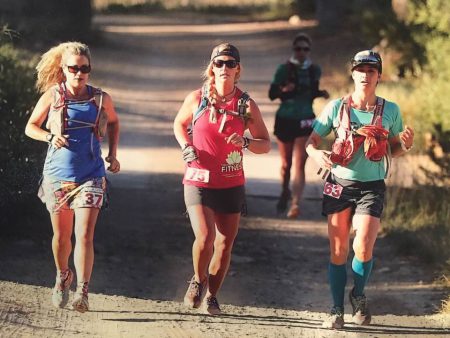 My decision to run the Sierra Crest 50k, happened on the Wednesday before the race. I had enjoyed the race so much the year before, and really valued it to prepare for the Castle Peak 100k. This year, I needed all the miles I could get training for my first 100 miler so I figured it would be a great way to get some quality miles in; plus, two of my favorite cronies, Moné Haen, and Tessa Waldron, were running it as well.

First of all, this race was a wonderful reminder to not take lightly the distance of 50 kilometers. I made a series of bonehead moves, of which I totally know better. These would include: grabbing the box from Amazon Prime on my doorstep the morning of the race and running in a brand new pair of shoes, goofing around moments before the start, and unknowingly dropping all my supplies out of my pack, going rafting on an inflatable unicorn the day before the race and getting incredibly banged up and overly sunned, and wearing a running skirt known to chafe, but is a ‘10’ in the cute department. Duh.

What I love about this race is its grassroots’ feel. You see lots of folks you know, both running the race and as volunteers. We yucked it up at the start, and when the race began, there was an awesome sense of comraderie as we hit the dirt road for the first two dust-filled miles. (Front guys, yeah, it’s different back there.) So much so were the good vibes, that I began a rousing rendition of ‘Frozen’s’ ‘Let It Go,’ to which there were multiple volunteers for the chorus. It was a terrific start, and we soon found ourselves in Euer Valley. The meadow was cool and calm and of course we sang a bit more as we chipped away at mile 6. I am always blown away by the beauty we get to encounter running in this place we call home. We crossed the meadow, and soon began climbing up to our first aid station, Firewalker.

We said a quick hello to Peter Werbel and grabbed some GU, then were off like a prom dress. Moné is a parent at the preschool I work at, and Tessa is a coworker, but I don’t often get time to spend chatting with them. I love that these longer races allow me to get to know someone on a deeper level, while still doing something I love to do. We compared the ‘fun’ in each other’s family dysfunction, and were quickly back at Tahoe Donner Cross Country Aid Station. This aid station was filled with enthusiastic, helpful people, and delicious snacks! Mone’s family was there and Abe, Sawyer, and Luna, their puppy, ran along with us for a bit, which was really fun. Moné quickly dropped us like a bad habit, and would go on to beat us by a solid half an hour, in her first 50k! 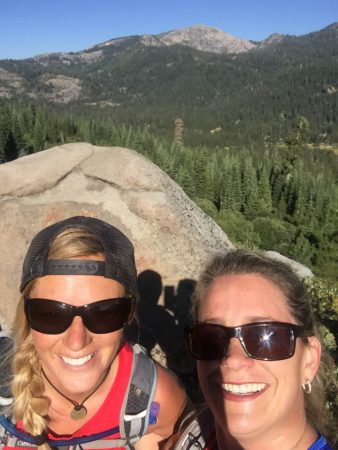 The back side of Tahoe Donner can get a bit tedious, and I was so glad to have Tessa’s company. This is when I discovered I had no bars, electrolytes or GU, and also when the aforementioned chafe-o-rama skirt made herself known. I won’t subject you to the details, but to the positive result, which is that my very vocal complaints have led to a wide variety of solutions. For those with this issue, I can now recommend Helen’s choice: 2Toms Sport Shield wipes, and Mone’s, Chamois Butt’r. Both can prevent even the most hideous case of Ring O’ Fire, I’ve since learned. The new shoes, while attractive, were also paying off in dividends. Javier has helped me solve this little issue, with 2Toms Blister Shield powder, as well as Balega Blister Resist Quarter socks. The other idea would be not to run in new shoes…

We climbed our tusheys up to Glacier Way, and were met by the delightful Sharon Fong, along with other sparkly people that made me feel like I still had some glitter left for this race. The ‘out and back’ portion of this aid station, gave us a chance to cheer for Moné. I thought her family had come to cheer at this station as well, and began a ballet performance for her daughter, Sawyer, in the distance, but quickly realized it was a different family as the mother hurried to get her daughter further off the trail from me. Ballet was never my strength. Sigh.

We soon found ourselves descending Johnson Canyon (Negra). I love this single track trail! It stays relatively cool and has such a perfect slope for kicking back and enjoying the ride. At the base of the aid station, we were greeted by many of the Auburn Ski Club athletes, all of whom are such nice kids. One even put ice in my hydration pack, which believe it or not, is a first for me. I don’t know when chilled water has ever tasted so delish, other than when climbing up towards Summit Lake. Another beautiful segment is that climb, once on the single track up to Castle Peak Road. We got into a ‘moose calling’ contest with some people fishing on the far side of the lake, and I don’t want to brag, but I’m fairly certain I won. The forest in this section makes you feel totally removed from the outside world (sans the moose calls, of course), and it felt great to lope through this portion. After a few miles, it does wear thin, and it was so nice to hit the road and see the last aid station below. Again, we chatted with people we knew and were ready for the last few miles.

We headed down to Boreal and hit the pavement for almost a half a mile (yuck), but were soon back on the trail behind the Auburn Ski Club. Of course, those last couple of miles can feel like a horrible burr in your saddle, and it was so nice to cruise into the finish. We were met by smiles and cheers, but best of all, a catered meal!

This race is a hard one, but filled with the kind of scenery from an Ultrarunning mag spread. It’s a small race, but has big-race support when you need it. I thoroughly enjoyed running this race and seeing so many friendly faces along the way. Thanks for a great day!