After a late night and restless sleep, the alarm went off at 2:45 am.  The evening before had been spent watching Jenelle Potvin (Nel) pack the crew bag, choose her clothing for the race,  and waffle between hand held water bottles or a vest with a bladder.  I drank beer and looked over the map while she calculated the approximate time to be at the aid stations.

Coffee brewed while Lucas made us all breakfast burritos, and then we loaded in to the cars to head to Spooner Lake. The start was cold, and I was happy when Nel turned over her down jacket to me.  I had all the pre-race jitters without the race, and that was fine with me.

Soon after the 5 am start, Lucas and I headed to the base of the Tunnel Creek trail.  If you’re not racing, what better way to wake up and start a long day than with a 3.6 mile, 1800’ climb?  I could tell Lucas was itching to spring up the trail, but my lungs would not permit and so he entertained me with a biology crash course in RNA.

We made it to the Tunnel Creek aid station with about 10 minutes to spare, and watched as Nel quickly made her way in and out.  We hung out, cheered on runners, and listened to the morning soundtrack at TC, 90s rap. I feared Salt-n-Pepa would stay in my head all day.

Lucas and I watched the racers climb out of the red house loop, and I attempted to guess gender by gait, unsuccessfully.  Luckily, Nel was wearing her yellow DPMR shirt and bright pink shorts, so easily spotted from a distance. We cheered her up the last little climb to the TC station, then watched her head toward Diamond Peak.  Lucas and I jogged back down the trail and then decided we had waited long enough.

Fully stocked with chips, beer, and baby carrots, we headed to Diamond Peak and set up camp.  After meeting some more of Nel’s friends and chatting with fellow crew teams, I started to watch the trail.  Lucas ran out to meet Nel and ran her through the parking lot to our station.  She wasn’t doing too hot, but Pete pushed the salt, I refilled her pack with ice, and Lucas and I hit the trail with her for a short ways up the Diamond Peak ski hill. Luckily, before it got truly steep, Nel told us it was time to part ways and Lucas and I bounded down the trail, encouraging racers along the way.

Diamond Peak 1 was in the bag, and it was time to head back to Spooner.  We briefly considered another hike up to Tunnel Creek but decided it was probably best for Lucas to rest his legs for his 80-100 mile pacing stretch later in the night.

By this time, it was a little after noon. Spooner was hopping, and Lucas relaxed for a bit while I hiked the trail towards Marlette Lake.  On my return, I saw the lead female hitting the trail and decided it was time to get to Stonehenge and set up shop. Though each aid station was fully supported, I laid out a mini, Nel-specific aid station wherever I was.  She requested avocado and turkey tortillas, so darn-it, she was gonna choke at least one down during the race! The little station was mainly for my entertainment and feeling of self-worth, and I displayed the items that might be most needed – mini cans of Coke, ibuprofen, arnica gel, Immodium, sunscreen, bugspray, and a cooler of ice (who’s main purpose was to chill the beer, but it also made Nel pretty happy).

After a quick turnaround at mile 50, Lucas cleaned up the station to transport to Diamond Peak 2, and I hit the road for a second hike up Tunnel Creek.

The parking area had calmed down, and the mountain bikers were thinning out.  The second time up was slower than the first, but I knew I had time.  I took a lot more photos and stopped and chatted with hikers. 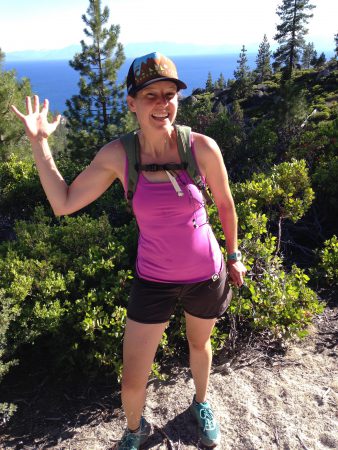 It was a hot and sweaty climb, but I immediately froze upon reaching the station. The sun was going down, the wind picked up, and I was underdressed.  Little Ms. Fairbank, whose mom was running the Tunnel Creek station, entertained me by karate chopping chunks of bark. I think she was happy for the company, and I certainly enjoyed the distraction from the cold.  Not too long after, I caught a glimpse of Nel and Pete making their way into the station.  She was doing great.  We chatted briefly and went our ways – I had a 3 mile downhill to the car, she a 38.5 mile night ahead of her.

On my way to Diamond Peak for the second time, I stopped in Incline Village to grab a burrito, then made my way to the lodge.  Definitely a different feel this time around. Subdued. Quiet. Anxious. Lots of napping going on  – tired out family and friends and the pacers waiting to join their racers for the last 20 miles.  I sat down with my burrito and a beer.  As I was relaxing, a racer came in – he was the fourth male, and I watched in awe as he ate an In-N-Out burger provided by his crew. Amazing. I suspect the ‘Out’ in the restaurant name took on a more literal meaning as he climbed the 1700’ out of Diamond Peak.

Around 11:30 we saw Nel approach.  She was looking great, and she and Pete had been running strong.  Lucas swapped in as pacer and they headed out. Pete and I chatted a bit, and then he headed home and I made my way back to Spooner. For a brief moment I considered another Tunnel Creek climb, but my watch, and my legs, which at this point had broken out in hives due to heat, exhaustion, and who know what else, were telling me I had gone far enough for the day. I was treated to a gorgeous drive back to Spooner with an early full moon illuminating the mountains around Lake Tahoe and sparkling across the water.

As soon as I arrived at Spooner, I took advantage of the VW Westfalia and napped for a couple of hours. My alarm rudely woke me at 4 am, and I groggily headed down to the finish. Coffee was brewing at the Ultra Lounge, and I grabbed a cup and wandered to the finish line. I watched pairs of lights descend the trail across Spooner Lake, the top racers making their way in as the sun hinted at rising. Just as the sky lightened, Pete and I spotted Nel’s bright yellow shirt and hot pink shorts. Woo-hoo! We cheered her and Lucas into the finish, and I gave up the down jacket once again.  She finished happy and strong. We chatted a bit, then I chauffeured her and Lucas back to Truckee for a shower and a nap.  Nel attempted to recap, but soon let exhaustion set in and drifted to sleep.

When I crewed Western States, I was energized by the cheering crowds and excitement of the event, but the TRT 100 was an altogether different experience.  I loved the hikes, the “hometown heroes,” the constant presence of DPMR, and the comradery among the runners.  I doubt I’ll be entering any 100 mile runs any time soon, but crewing a race like this provided me with the scenery and the fun, without the blisters, GI issues, and pure exhaustion.