Julia Millon made a lasting first impression on the club, while stepping up in a big way (to a last-minute request) to volunteer at our Tahoe 200 aid station last September, along with her boyfriend Lucas.

They tirelessly worked through the night, providing first-rate blister treatment for the wearied runners. Julia has had a rough year battling with an autoimmune disease flare-up, but she has an incredible, positive outlook, big dreams (Barkley!), and if anyone has the heart to accomplish these goals, it is Julia. We are proud to introduce you to our January Member of the Month, Julia Millon.

What brought you to Truckee, and where were you living before?

I was living in Berkeley, CA before moving to Truckee. I went to UC Berkeley where I worked with sports medicine for NCAA athletes and got a degree in cognitive science. The year before moving to Truckee I worked as an EMT, mostly in Marin County, and West Oakland. I moved to Truckee to save money, and prepare to go back to school, as well as get some great altitude training for Bear 100, which I was signed up for. My autoimmune disease, however, sidelined me for the last half of 2014.

When did you begin long-distance running? Why?

I began running as a high school freshman, mostly because of peer pressure, but loved it and stuck with it, and it’s been a part of my life ever since. I grew up in the tiny town of Winters, CA, and there wasn’t much else to do, so I ran and played drums in a punk band for fun! (We were awful!). Since I got sick at 17 I’ve had a lot of up and downs, but taking up trail running in the past few years has been a totally positive factor in my life, and makes dealing with everything else way easier.

Do you race? Does racing motivate you? if not racing, what motivates you?

Racing does not aways motivate me, but I’ve found in the last few years that racing on trails is such a great way to push myself and my endurance, and especially long races are a great celebration of presence of mind and finding a purpose in life in general. I would love to start racing 100 milers as soon as I get my body there. I’ve worked at many races treating injuries, and helping people live their dreams in that capacity has been really inspiring.

In high school, our track coach used to give us a speech about his dad trying to finish Western States every year before our league meet. Mostly the speech was about how it’s not always important how you do, but trying your best to accomplish what you want, and mainly that you always show up. I loved the idea that there was this whole aspect of the sport which was less concerned with time and more concerned with enduring an incredible experience. It’s been a dream of mine to race Western States ever since. I’d also like to experience running Barkley, which is enticing because there hasn’t been a female finisher yet. I’d also love to run Hardrock.

My stomach is very picky, I stick mostly to normal foods like fruit and nut butter. Before long runs I make sure to do that ridiculous butter and coconut oil in my coffee thing, it actually has helped me not bonk, because I don’t tolerate gels very well. Post run meal favorite is a VERY RARE steak and half a watermelon (it would probably be a whole one, but my boyfriend Lucas usually takes the other half).

Lucas and I went on a run to the top of Mt. Baldy in Southern California, which was awesome. It was in January so we had on yak tracks which we bought on the drive down. We only went in the first place because it was the closest sunny place to the Bay Area. We picked a route that went on the PCT to Devils back bone trail, which is a section that was very rugged and quite snowy above 9000 ft. It ended up being 20 miles, and probably the craziest thing we’ve done yet. Swing the relative ease of the trail from the other side was a trip, but we felt pretty awesome about the way we went!

What was your most challenging/ character-building experience this past year?

Definitely struggling through illness brought on by my autoimmune disease. I was unable to walk much for a month, and I had to give up running Bear 100, which was beyond hard. I tried to race another ultra earlier in the year, and had to drop out from a foot injury, and I also had to drop out from CIM. Race wise, 2014 was a tough year for me, but in general I actually trained pretty hard, and expanded my solo run boundaries, which Im happy about.

What are your racing/adventure plans for 2015?

I’d like to run the Canyons 100k this May.  I also heard UROC is going to be in Auburn….it’s such a silly name, how can I not?

I’m still recovering a bit from illness so I’ve been taking it easy and making money by farming the 800 orange trees at my dads place in Winters, CA, where I’ve been staying to get treated in Davis. I have time to run for sure, which is great! I love getting up early, though, so when I was working 50 hours a week I got up at 4 AM to run. I love sunrises.

My mom, who lives in Soda Springs, told me about the club and I joined so I could have a good intro to trail running in the area. Everyone is so awesome and the club atmosphere is really relaxed compared to many other running clubs, even though there are some serious runners in the club!

Do you ski or do any snow sports?

I like to cross country ski, and I like to go on backcountry trails because it’s beautiful and peaceful, and I’m too cheap to get a pass. I can snowboard, but I’ve been hesitant to go again since I got a knee surgery a few years ago. 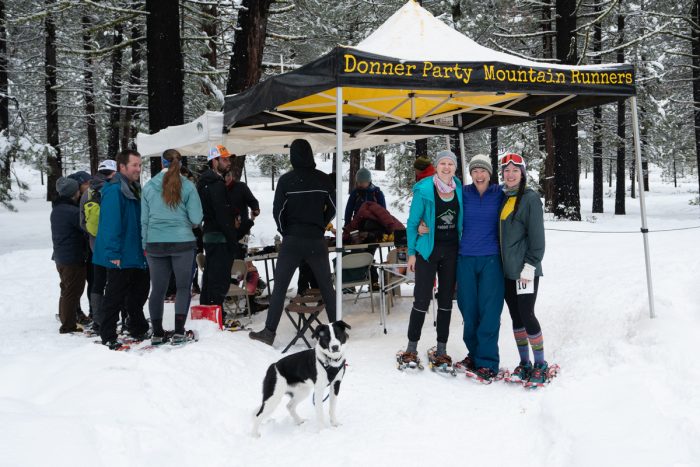 Morning speedwork with Coach Peter Fain is back this year! Location and start date TBD. The calendar will be updated as we get closer to event day.  Start time for the run will be 6:30am[...]
View Calendar
Add