Sugar Bowl to Squaw on the Pacific Crest Trail is the iconic trail run of Donner Summit. Start 4 miles north at Boreal and you have 19 miles of granite boulders, dramatic ridges, and sweeping views from Donner Lake to peeks of Tahoe herself. 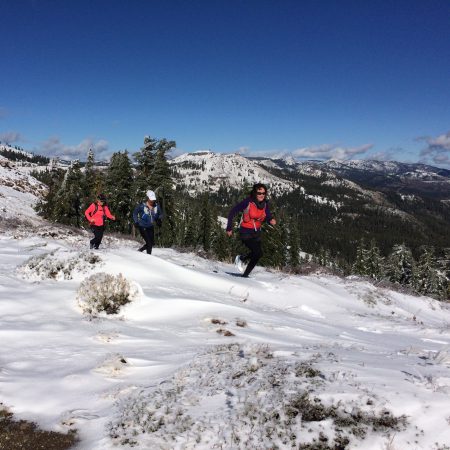 The route is easy enough to follow in clear conditions (take the PCT south until you turn east on the Granite Chief Trail down to Squaw,) but the necessity of a shuttle and the remoteness of parts of the route make it intimidating to the uninitiated.

Last weekend, fellow founding member JP Prince and I had the honor to introduce five runners to the route in the most stunning of conditions. After hitting refresh on the weather page all week, we watched a storm roll through Saturday, leaving about 4 inches of fresh snow at the higher elevations. In Tahoe-speak, it was a blue bird day.

If you’re going to do the run, it’s really nice to have someone who likes you (or owes you) enough to shuttle you both directions. We lucked out with my husband, Javier, who delivered us all to the start and then retrieved us hours later at the finish.

Although the snow slowed our pace a bit, it did not require snowshoes or other special gear. The sky was crystal-clear and the trees looked like a scene from the North Pole, with icicles  frozen like sideways ferns. And just as some were fatiguing of the snow, we dropped onto the delicious dirt of the Granite Chief Trail.

Later we would hear from another crew of the Donner Party Mountain Runners who had explored the PCT to the north between Sierra City and Donner Summit. Their day was just as beautiful, though much longer and even more arduous. (Click here to read Peter Fain’s account of their PCT adventure.) Between the groups, we covered over 50 miles of the PCT on Sunday!

Join Meggie for a 6-week series of fall trail runs on Tuesday mornings at 9:00am starting on October 5th. This is a “no-host unofficial” social run. Well-behaved dogs are welcome. Mileage and exact route will be[...]
View Calendar
Add

What a weekend of volunteering, cheering, running