It’s been a little while since I’ve posted a race report. The Lost Sierra 50km deserves some attention because of the challenge, support and great course that it provides. And, that it is in a section of the Sierras that are less traveled by trail runners. Several founding memb 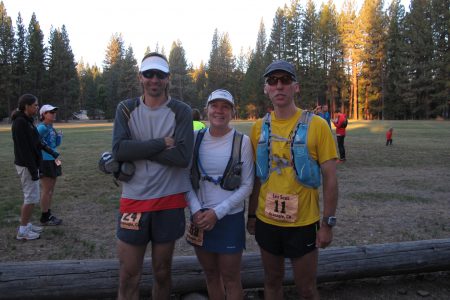 It was a chilly start. I was wearing a beanie and gloves till moments before the start. I shed the extra warmth and moments later we were off running down the highway. A mile and half of pavement (felt longer) and then we were in the woods. This gradual climb of about 10 miles varies between fire road and single track. It was all in really good shape and easily runnable. I ran the first 1/2 marathon with Ben Tedore and one other dude. We reached the top of Mill peak together which would be the end of the social part of the race. The fire road descent to Gold Lake was just to0 fast for me this day.

A few minutes behind I came into the aid station where Helen was waving the jersey for me to wear (because I asked), but I declined, just stopping for a small bit to eat and drink before heading into the super scenic and challenging portion of the race. I tried to keep my head up and enjoy the area. But the trail is so darn rocky that I was more concerned about falling.

Miles of up, down, around numerous lakes before we reached the Long Lake dam. A small aid station and the climb up Mt. Elwell began. The climb started by maneuvering over a large boulder strewn trail before it hitting dirt again where it just got steeper and steeper. The switchbacks and the top seemed to never come but when it did, the start of the decent was so technical that it seemed to be just as slow to go down as it was going up.

The toughest sections were behind us but there was still a 7-mile downhill to tackle. As we progressed down the temperature gradually got warmer. Wth 5 miles to go we got to the last aid station where the Castellar Crew was waiting. With a quick stop, some ice to cool off we departed for the final, seemingly never ending, last 5-mile stretch. The finish line was changed from the first year I did the race. This time we finish in a big open grassy park. We were greeted by an enormous amount of festivities, food and the biggest bounce house I’ve ever seen.

The small town of Graeagle really makes a great venue for ultrarunning. The small town and its vibe exemplifies so much of what ultra runners look for in racing. I’ll be back again for this race.